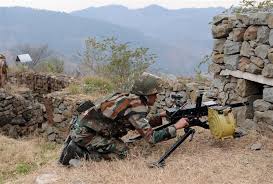 Jammu: Pakistani firing along the Line of Control (LoC) in Jammu and Kashmir’s Rajouri district has killed an Army soldier, a defence spokesperson said.

The deceased is identified as Sepoy Laxman, a resident of Jodhpur in Rajasthan. He is the fourth soldier killed this year in ceasefire violations by Pakistani troops along the LoC, the defence spokesperson said.

The spokesperson said Pakistan Army resorted to unprovoked ceasefire violation on the LoC in Sundarbani sector of Rajour and our troops responded strongly to the enemy fire.

The Army in a statement said “Sepoy Laxman was a brave, highly motivated and a sincere soldier. The nation will always remain indebted to him for his supreme sacrifice and devotion to duty.”

15 injured in monkey attack at Banki