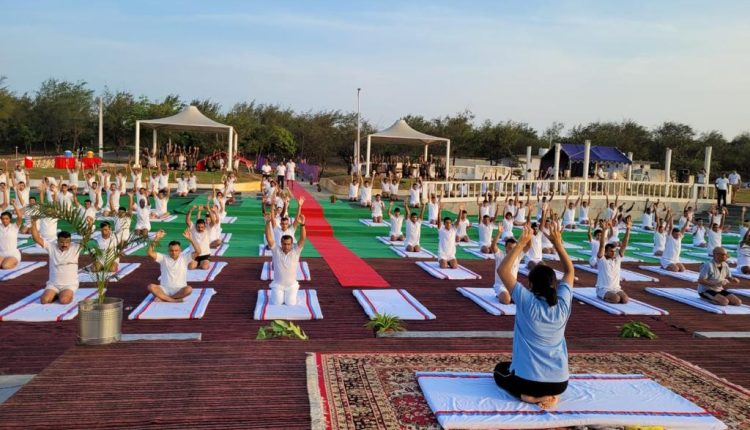 Indian Army Leads The Way To International Day Of Yoga

At Raipur, the event was organised at the iconic “Saubhagyam” Meditation Centre on the banks of the Sendh Lake. Over 250 Officers, Jawans and Civil Defence Employees actively participated with their families.

The events were led by Ms Kirti Gupta, an expert Yoga Instructor trained at Morarji Desai Institute of Yoga, Delhi, with over 5 years of experience. “Yoga is the key to being fit and it’s essential to do it daily to keep your mind stress-free”, she said. Ms Kirti Gupta, herself is an Army wife.

Many consider the Indian army the epitome of fitness since the Indian Army embodies the commitment and zeal to be a fighting fit forces guarding our borders. And so, it is no surprise that on the International Day of Yoga -2022 (IDY-2022), the Indian Army’s Headquarters Chhattisgarh and Odisha Sub Area (COSA) organised a talk on “The Benefits of Yoga”, followed by a demo of easy – to – do Yogasanas at Naya Raipur on 21th Jun 2022.

“The Indian Army is always aligned to National themes. This International Day of Yoga theme focuses on telling people to adopt a healthy lifestyle by doing exercise and yoga. The 8th edition of the International Yoga Day will create awareness and enthusiasm in our team at ‘COSA’ and also inspire others to follow a healthy lifestyle for well-being”, a senior army official from COSA said.

HQ COSA located in Naya Raipur is the highest military headquarters looking after the Army-related administration in Chhattisgarh and Odisha. Even in the past, the headquarters has taken various initiatives to enjoin the citizens with the army and also to assist ex-servicemen by coordination with the state government.