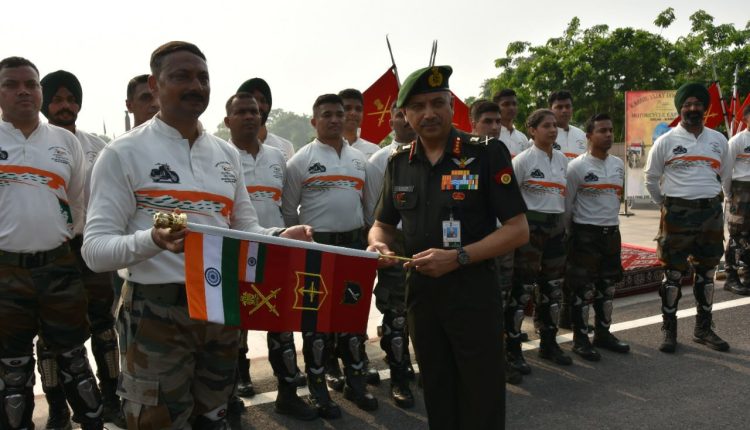 New Delhi: To commemorate the 23 years of victory over Pakistan in the Kargil War of 1999 and celebrate the spirit of ‘Azadi Ka Amrit Mahotsav’, the Indian Army has organised a Motor Bike expedition from New Delhi to the Kargil War Memorial at Dras (Ladakh).

The 30-member rally was flagged off by Lt Gen B S Raju, the Vice Chief of Army Staff from the National War Memorial, New Delhi on 18 July 22.

Over the next six days, the team of 30 serving personnel who have embarked on this ‘dream expedition’ will endeavour to replicate the indomitable spirit of the Kargil brave-hearts by rekindling the spirit of fortitude, and courage and adventure synonymous with the Indian Army.

The bike rally would pass through Haryana, Punjab, Jammu & Kashmir and Ladakh before culminating the expedition at the Kargil War Memorial, Dras on 26 July 22. In order to cover maximum areas, the rally is being split into two teams, who will move along two different axes; i.e the Zojila Pass axis and Rohtang Pass axis, covering a distance of 1400 Km and 1700 Km respectively.

During the rally, the team will traverse through high mountain passes and arduous tracks in an endeavour to reach remote localities along the route.

The rally intends to spread the message of patriotism by highlighting the grit & determination portrayed by our brave soldiers, deployed in service of the Nation.