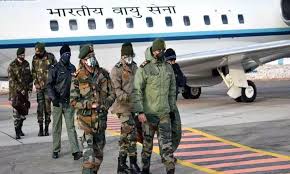 According to reports, the Army Chief visited the forward areas including Rechin La, and undertook a first-hand assessment of the situation along the Line of Actual Control(LAC) in Ladakh.

Nearly 50,000 troops of the Indian Army are deployed in a high state of combat readiness in various mountainous locations in eastern Ladakh in sub-zero temperatures.

Lt Gen PGK Menon, the commander of the Leh-based 14 Corps, popularly known as ‘Fire and Fury’ Corps, briefed the Army chief on various aspects of the situation in eastern Ladakh.

Sources said Gen Naravane reached Ladakh at 8:30 am on a day-long visit with an aim to review the ground situation in the region that is experiencing harsh winter.

Later, the Army Chief interacted with the troops deployed in forward areas and exhorted them to continue working with the same “zeal and enthusiasm”. He also distributed sweets and cakes ahead of Christmas.