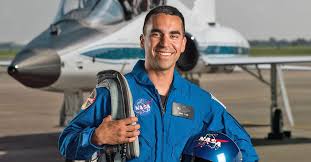 Florida: NASA has selected an initial team of 18 astronauts, including Indian-American astronaut Raja Chari, to form the Artemis Team and help pave the way for the next astronaut missions on and around the Moon as part of the Artemis program.

Chari joined the astronaut corps in 2017. A colonel in the U.S. Air Force, he was raised in Cedar Falls, Iowa. He received a bachelor’s degree in astronautical engineering and a master’s degree in aeronautics and astronautics.

A U.S. Naval Test Pilot School graduate, Chari worked on F-15E upgrades and then the F-35 development program, before coming to NASA.

“I give you the heroes who will carry us to the Moon and beyond – the Artemis Generation,” Vice President Pence, is quoted saying in a press release, speaking at the meeting. “It is amazing to think that the next man and first woman on the Moon are among the names that we just read. The Artemis Team astronauts are the future of American space exploration – and that future is bright.”

The astronauts on the Artemis Team come from a diverse range of backgrounds, expertise, and experience, NASA noted, adding that the agency’s modern lunar exploration program will land the first woman and next man on the Moon in 2024 and establish a sustainable human lunar presence by the end of the decade.

The flight assignments will be announced later and additional Artemis Team members, including international partner astronauts, will join this group, as needed.

The astronauts of the Artemis Team are expected to help NASA prepare for the coming Artemis missions, which begin next year working with the agency’s commercial partners as they develop human landing systems; assisting in the development of training; defining hardware requirements; and consulting on technical development. They also will engage the public and industry on the Artemis program and NASA’s exploration plans.

Troubled by air pollution? Add these 7 lung-cleansing foods to your diet