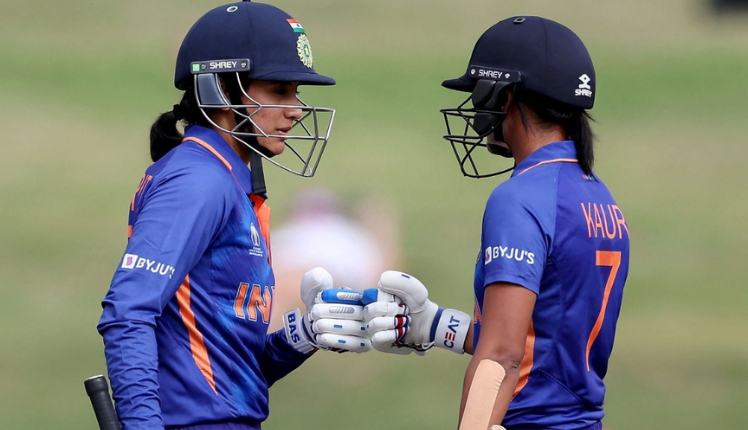 A brilliant comeback from the bowlers in the first innings followed by a smashing start by the top order helps India take an unassailable 2-0 lead over Sri Lanka in the T20I series.

The luck of the toss went Sri Lanka’s way in the second T20I and the hosts decided to bat first in Dambulla. Sri Lanka made one change with Ama Kanchana making way for Hasini Perera.

India decided to tinker with their winning combination – Richa Ghosh and Rajeshwari Gayakwad were replaced by Yastika Bhatia and Simran Dil Bahadur.

Vishmi Gunaratne set the tone with three boundaries in two overs while Chamari Athapaththu smashed a six and a four in the last over of the Powerplay. Despite not picking up a wicket in the first six overs, Indian bowlers managed to sneak in a few dot balls as Sri Lanka went a little over run-a-ball with theha fielding restrictions.

The openers kept finding the boundary at regular intervals but couldn’t rotate the strike as well as they would have liked. Athapaththu was given a lifeline when India dropped her at the stroke of the halfway mark. She made the visitors pay by striking two boundaries each in the next two overs.

Just as the pair surpassed the record for the highest first-wicket partnership for Sri Lanka in Women’s T20I, Pooja Vastrakar broke the 87-run stand as Athapaththu’s flick went straight into the hands of Radha Yadav at deep square leg.

The wicket of the skipper set the cat amongst the pigeons as the rest of the batters failed to capitalise on the tremendous start provided by the openers. Like her opening partner, Vishmi Gunaratne too departed in her 40s.

Deepti Sharma, who had gone for 30 runs in her first three overs, made up with the wickets of Harshitha Samarawickrama and Nilakshi de Silva in the 18th over.

The last two overs fetched 15 runs but Sri Lanka fell well short of a strong total, finishing their innings at 125/7.

Chasing a modest 126 for the win, India were far from complacent and looked to kill the game as early as possible. Smriti Mandhana made her intent clear by smashing the first ball of the innings for a four. Shafali Verma wasn’t going to be left behind as she plundered two fours and a six in her cameo of 17 runs that came in 10 balls.

Sabbhineni Meghana carried on from where Shafali left off, smashing Udeshika Prabodhani for four boundaries in an over. Though she fell in the last over of the Powerplay, India sat comfortably in their chase at 52/2.

The end of the fielding restrictions had little effect on Mandhana’s approach, as she collected five fours in the next five overs to take Sri Lanka completely out of the game. The boundary-laden knock came to an end when she was stumped off the bowling of Inoka Ranaweera. The wicket came a little too late for Sri Lanka, with India needing less than five runs an over at that point.

Jemimah Rodrigues couldn’t replicate her heroics from the first game and went back for just 3. It did get a little too close for comfort towards the end, with India needing 15 off the last three overs but Harmanpreet Kaur batted through to guide India to a win with five wickets and balls to spare.