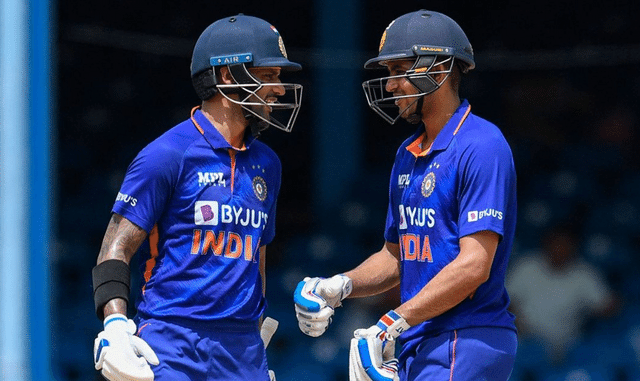 Half-centuries from Shikhar Dhawan (97), Shubman Gill (64) & Shreyas Iyer (54) propelled Team India post 308 for 7 in the first ODI of the three-match series against West Indies at Queen’s Park Oval on Friday.

However, West Indies bowled well at the death, conceding just 73 runs in the last 15 overs in the 1st ODI against West Indies.

It was Gudakesh Motie, who struck in quick succession to dismiss both the set batters Dhawan and Shreyas Iyer to bring West Indies in the game. Dhawan and Iyer stitched 94 runs for the second wicket. Earlier, Shubman Gill lost his wicket on 64 runs after adding 119 runs with Dhawan for the opening wicket. Though Gill got run out, Dhawan kept India in control against the hosts until he too walked back to the pavilion.

The match started with West Indies skipper Nicholas Pooran winning the toss and opting to bowl against India. It is worth noting that Ravindra Jadeja, India’s vice-captain for the series, has been ruled out of the first two games due to injury.