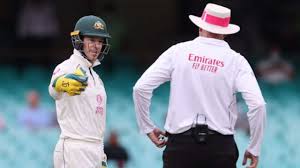 Sydney: Australia skipper Tim Paine on Saturday lost his cool at on-field umpire over an unsuccessful review on day 3 of the ongoing third Test against India at the Sydney Cricket Ground (SCG).

According to reports, the incident took place in an over bowled by Nathan Lyon. The Australian team appealed for a bat-pad catch as Cheteshwar Pujara defended a flighted ball from the spinner and the ball popped up to short leg.

The on-field umpire Wilson did not give the Indian batsman out and the hosts then opted to review the decision. After review, third umpire Bruce Oxenford went with the on-field call of not out.

It was then that Paine, who lost his cool and was seen having a verbal onfield exchange with the umpire Paul Wilson stating that the third umpire also needed to look at the off side camera angle and not rely on just the leg side.

Wilson was then heard saying that the third-umpire made the final call, and Paine should not be saying anything to him.