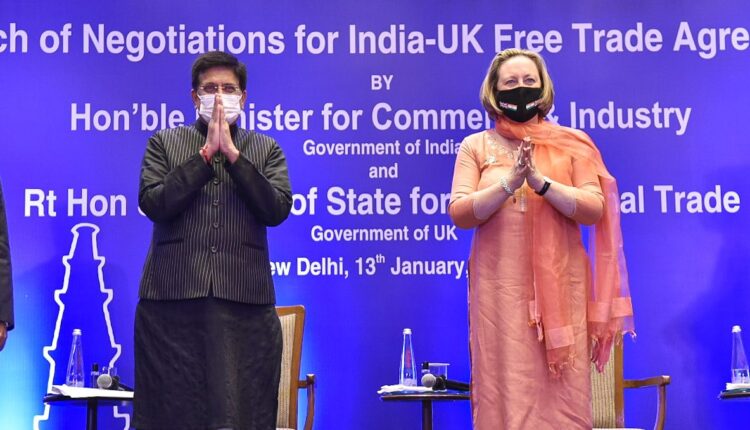 The FTA is expected to facilitate the target of doubling bilateral trade between India and United Kingdom by 2030, set by the Prime Ministers of both the nations, Shri Narendra Modi and Mr. Boris Johnson in May 2021.

Speaking on the occasion, Shri Piyush Goyal said that both India and UK are vibrant democracies, with a partnership built on our shared history and rich culture. The diverse Indian diaspora in UK, who act as a “Living Bridge”, adds further dynamism to the relations between the two countries, he added.

The Minister said that the FTA with UK is expected to provide certainty, predictability and transparency and will create a more liberal, facilitative and competitive services regime.

Shri Goyal said that the FTA negotiations with the UK is expected to increase our exports in Leather, Textile, Jewellery and processed Agri products. He added that India is also expected to register a quantum jump in the export of Marine Products through the recognition of 56 marine units of India.

The Minister said that the Mutual Recognition Agreements (MRAs) on Pharma could provide additional market access. There is also great potential for increasing exports in service sectors like IT/ITES, Nursing, education, healthcare, including AYUSH and audio-visual services. India would also be seeking special arrangements for movement of its people, he added.

The Minister assured that subsequent to the unveiling of FTA, the two nations would proactively and regularly engage with each other, for deliberating on the scope and coverage of the trade deal.

Observing that UK was a major trade partner of India with substantial bilateral volume of trade in goods and services, Shri Goyal said that the cooperation extended across areas like tourism, tech, startups, education, climate change, etc. and that the two nations were looking forward to a mutually beneficial trade deal with balanced concessions and market access package in a wide range of sectors.

Calling for the enhancement of sectoral cooperation by addressing market access issues and removing trade restrictions, Shri Goyal said that it would help generate direct and indirect employment in both nations.

The Minister said that the India-UK FTA will also contribute in integrating value chains and help augment our mutual efforts to strengthen the resilience of supply chains. Reminding that the leaders of both nations had envisioned launching the FTA Negotiations in early 2022, Shri Goyal expressed his happiness at the successful conclusion of discussions in a timely manner to announce the launch of our FTA negotiations today.

The Minister also informed that it was also agreed to explore during the FTA negotiations, the possibility of an Interim Agreement to provide quick gains for benefitting businesses in both nations. Our endeavour is to deliver a comprehensive, balanced, fair and equitable FTA, to benefit our small, medium and micro-enterprises in both nations, he said.