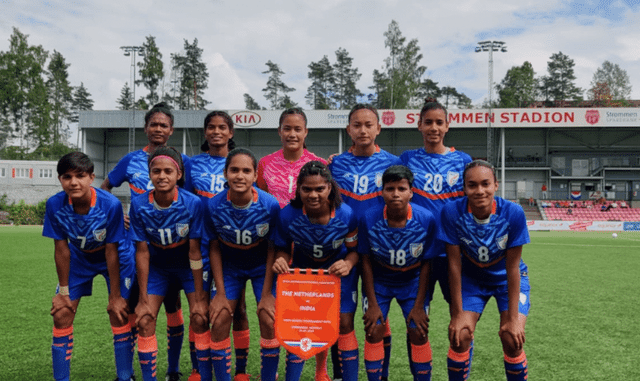 NEW DELHI: The India U-17 Women’s National Team lost 1-5 to Netherlands in the opening match of the Open Nordic Tournament WU-16 at the Strommen Arena, Norway, on Friday, July 1, 2022.

Netherlands stunned the Indian defence in the opening minutes, as Ilayah Dostmohamed’s speed proved too much. In the 5th minute, Ilayah found the net and three minutes later, Eva Elberink bundled the rebound ball home to make it 2-0 for the Dutch.

The Young Tigresses pulled one back on the 12th minute via Neha’s shot. She went one on one with goalkeeper Brenda Badenhop, found the space inside the box, and made no mistake to slot it home.

Head Coach Thomas Dennerby made the first substitution for India in the 32nd minute as Naketa replaced Sudha Tirkey.

In the 33rd minute, Netherlands skipper Veerle Buurman scored from a free-kick from almost 35 yards out to make it 3-1 in favour of the Dutch. Before going into the break, Neha went in for another attempt on goal but her effort was collected by Brenda again. The half time score read 3-1 in favour of Netherlands.

Coach Dennerby made another change bringing in Shailja in place of Babina Devi in the 48th minute.

In the 52nd minute, Netherlands skipper Veerle’s penalty shot found its way into the bottom right corner, making it 4-1.

Dennerby made back-to-back changes as Rejiya Devi and Shelia Devi came on in place of Kajol and Shubhangi Singh respectively.

In the 67th minute, substitute Mirte Koppen added to Netherlands’ goal tally with a header from inside the box, further extending her side’s lead to five goals.

The last effort by India was taken by Astam whose free-kick in the 72nd minute from the left flank missed the target by a whisker. Denneby made the last change into the game bringing on Gladys in place of Neha as the full-time scoreline read 5-1.