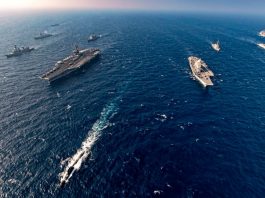 New Delhi: India and Singapore are to begin naval exercises in the Andaman Sea from Monday for enhancing mutual inter-operability.

This is the 27th edition of the India-Singapore Bilateral Maritime Exercise (SIMBEX-20) and will take place between November 23 to 25.

Indian Navy spokesperson Commander Vivek Madhwal told the media that the scope and complexity of these exercises has increased steadily over the past two decades to include advanced naval drills covering a wide spectrum of maritime operations.