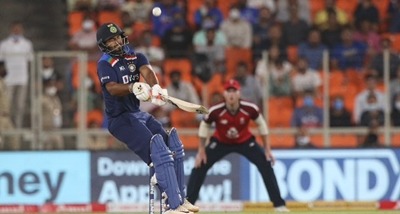 India has set a target of 125 runs in the first T-20 match against England being played at the Narendra Modi Stadium in Ahmedabad.

Some fiery bowling spells by English pacer in the opening overs left the Indian openers struggling and India was reduced to 40 for 3 in the 9th over.  Skipper Virat Kohli was out for a duck. However, Rishabh Pant and Shreyas Aiyyar steered the innings to some extent.

Shreyas Aiyyar top scored with 67 runs and was out in the last over of the match. Rishabh Pant and Hardik Pandya were the other two notable contributors to the Indian Innings. Pant scored 21 runs while Pandya Contributed 19 runs.

Earlier England won the toss and decided to bowl first. In a surprise move, India skipper Virat Kohli announced that Rohit Sharma will be resting in the first few games.

6.75 quintals of cannabis seized from bitumen tanker in Koraput