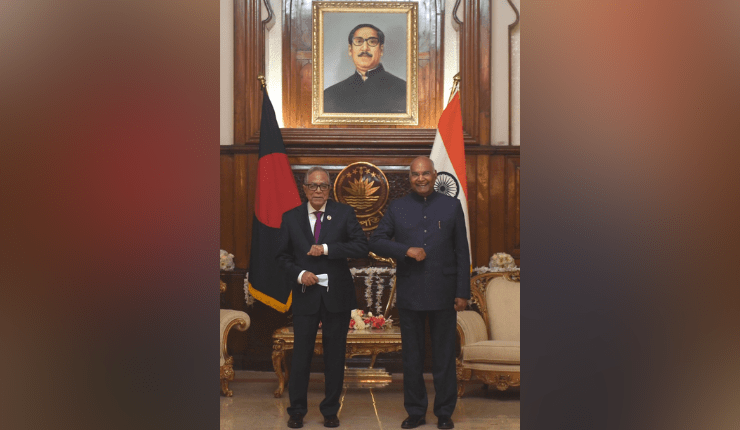 Dhaka: President Ram Nath Kovind and Bangladesh First Lady Rashida Hamid will attend the national programme of Victory Day as the guest of honour at the National Parade Ground here.

The President of India Ram Nath Kovind, landed at the Hazrat Shahjalal International Airport in Dhaka this morning (December 15, 2021) where he was received by Mr Mohammad Abdul Hamid, the President of Bangladesh himself.

President Kovind is on a three-day state visit to Bangladesh from December 15 to 17, 2021, which is his first state visit since the outbreak of the COVID pandemic.

The President was accorded a ceremonial welcome and given Guard of Honour at the Airport.  Thereafter, he visited the National Martyrs’ Memorial in Savar and paid tributes to the martyrs of the Liberation War of Bangladesh.

Subsequently, he visited Bangabandhu Memorial Museum at 32 Dhanmondi where he paid homage to Bangabandhu Sheikh Mujibur Rahman, the Father of the nation of Bangladesh.

In these meetings, the President congratulated the government and people of Bangladesh on the historic occasion of Mujib Borsho, 50th anniversary of liberation of Bangladesh and 50 years of India-Bangladesh bilateral relations.  He said that the Liberation War of Bangladesh was an inspiring episode in recent history and India was honoured to be the part of it. He said that, 50 years ago, India and Bangladesh began a special friendship which was laid in commonalities of language, kinship, religion and cultural ethos as well as mutual respect.

The President reiterated that Bangladesh has a special place in India’s ‘neighbourhood first’ policy.  He said that India’s development partnership with Bangladesh is one of the most comprehensive and wide-ranging ones. At the same time, our relationship is mature enough to handle most complex of problems.

Speaking about the trade and connectivity, the President said that connectivity forms an important pillar of India-Bangladesh relations.  The two countries have much to gain from their geographical proximity.  He was happy to note that Bangladesh is one of India’s largest trade partners.  He said that India looks forward to a more organised and seamless trade between the two countries.  He noted that there is a lot of scope in partnering in areas like space, nuclear technology, defence, pharmaceuticals and other advanced science and technology field.  He said that a formal ‘Comprehensive Economic Partnership Agreement’ would give a significant boost to the two-way trade.

Speaking about cooperation on multilateral fora, the President said that India and Bangladesh have a broad agenda of issues and common concern, especially pertaining to South Asia which would require closer cooperation.