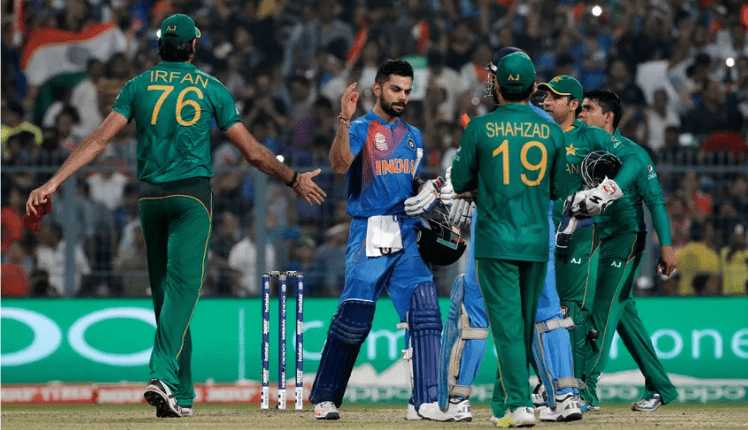 By Pradeep Sahoo On Oct 23, 2021
182
Share
Dubai: Matches between India and Pakistan are always seismic and the form of both teams ahead of their ICC Men’s T20 World Cup 2021 opener only adds further spice to the mix.

The heavyweight Group 2 contest is the first T20 meeting between these two rivals since the last time this tournament was played in 2016 and no teams have won more T20Is in the intervening period than India and Pakistan.

That record has helped put both among the favourites to challenge for the trophy and a good start will be crucial for building momentum this time around.

History is on India’s side. Pakistan have never won this fixture at an ICC global event, with the very first ICC Men’s T20 World Cup final in 2007 one of 12 so far unsuccessful attempts at toppling their neighbours on the big stage.

But India captain Virat Kohli, whose unbeaten 55 steered his side home against Pakistan in the 2016 group stage, is savvy enough to know that record will count for little once the first ball is bowled in Dubai.

Kohli is entering his last tournament in charge in the shortest format and will be tasked with ensuring his players shut out the noise amid the pressure and expectation on Sunday – something he feels they are more than equipped to do.

“I always maintain that for me it’s never been different to any other game of cricket that we play,” he said.

“We are in a situation where we are in charge over what we need to do on the team, and we understand for that to happen, we need to be in the most balanced place possible.

“We feel pressure playing any kind of game, and it’s also a thing to understand that as professional cricketers, you eventually start thinking about the situation that you’re going to be in as batters and bowlers.

“It’s very important for us to keep focused on that because a game like this, there’s such unnecessary stuff from a professional point of view happening on the outside.”

Kohli is due to line up at three, with KL Rahul’s superb IPL form set to earn him the role as Rohit Sharma’s opening partner, but the depth of talent at India’s disposal means there are plenty of selection dilemmas elsewhere.

Much may depend on the fitness of Hardik Pandya and whether the dynamic all-rounder is fit enough to bowl, though his captain suggested his destructive batting alone may be enough to see him in the starting XI.

“Hardik’s physical condition is getting better in terms of being prepared to bowl at least two overs for us at a certain stage in this tournament,” Kohli said.

“We strongly think that we can make the most of the opportunity that we have at hand until the time he starts bowling. We have considered a couple other options to chip in for an over or two. So we are not bothered about that at all.

“What he brings at that No. 6 spot is something that you just can’t create overnight. I was always in favour of backing him in Australia as a batter purely, and we saw what he did in the T20 series and how he can take the game away from the opposition when he’s in full flow.

“We understand the value he brings to the team as the No. 6 batter, and in world cricket if you look around, there are specialists who do that job.

“For us that is way more valuable than forcing him to do something that he’s not ready for at the moment, but he’s motivated and very keen to start giving us a couple of overs.

“When that happens, obviously the balance becomes even better but we are pretty confident how we are heading into the start of this tournament.”

Kohli’s opposite number Babar Azam is the man charged with reversing Pakistan’s fortunes against their old foes and setting the tone with the bat.

The experience of Mohammad Hafeez, Fakhar Zaman and Mohammad Rizwan, along with the youth of Haider Ali, are set to complement Babar’s talents at the top of the order and the 27-year-old is pleased with how his side are shaping up.

“I think this time our main strength is batting,” he said. “The way our batters have been performing over the last couple of months, I am very hopeful that we will produce some good results due to our batting and also do better in the field.

“We have forgotten what we have done in the past and we are trying to focus on the future. We will try to do better on the field in this match and we will try to produce better results.

“The mood in the camp is very confident and we are all very excited. The first game is always very crucial, and we will try to produce some good performances in the first game and carry forward those performances.”