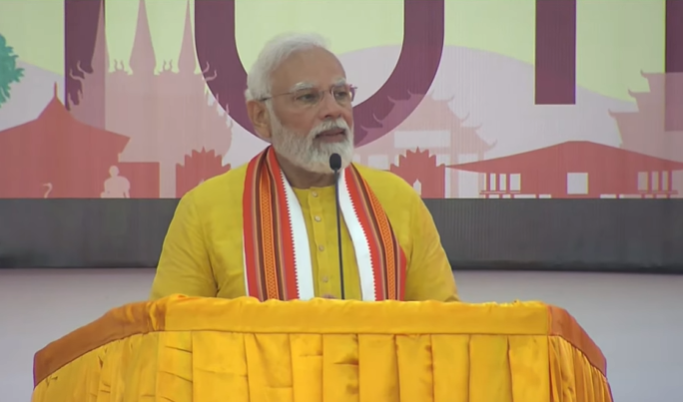 The plot was allocated to the IBC by the Lumbini Development Trust in November 2021. After the “Shilanyas” ceremony, the Prime Ministers also unveiled a model of the Buddhist centre, which is envisaged as a Net-Zero compliant world-class facility that would house prayer halls, meditation centre, library, exhibition hall, cafeteria and other amenities and would be open to Buddhist pilgrims and tourists from around the world.

Both Prime Ministers held a bilateral meeting, during which they followed up on their discussions held on April 2 in New Delhi. They discussed specific initiatives and ideas to further strengthen cooperation in various sectors, including culture, economy, trade, connectivity, energy and development partnership.

The two sides agreed in principle to establish sister-city relations between Lumbini and Kushinagar, that are among the holiest sites of Buddhism and reflect the shared Buddhist heritage between the two countries.

PM Modi assured India’s support in the development of Nepal’s hydropower sector and in encouraging interested Indian developers to expeditiously explore new projects in this regard. Both Prime Ministers agreed to further expand educational and cultural exchanges to bring the people of the two countries closer. A Luncheon was hosted in honour of Prime Minister Modi by Prime Minister Deuba.

Both Prime Ministers participated in a special event to mark the 2566th Buddha Jayanti celebrations that was organized by Lumbini Development Trust under the aegis of the Government of Nepal. At the event, PM Modi addressed a large gathering of monks, officials, dignitaries and those associated with the Buddhist world.

The visit of Prime Minister to Lumbini, Nepal follows the successful visit of Prime Minister Deuba to Delhi and Varanasi from 1-3 April 2022. Today’s visit has provided further momentum to the multifaceted partnership between the two countries and advanced cooperation in key areas, particularly in education, culture, energy and people to people exchanges. Prime Minister Modi’s visit to Lumbini also emphasizes the deep and rich civilizational connect between India and Nepal and the contribution of people on both sides to foster and promote it.