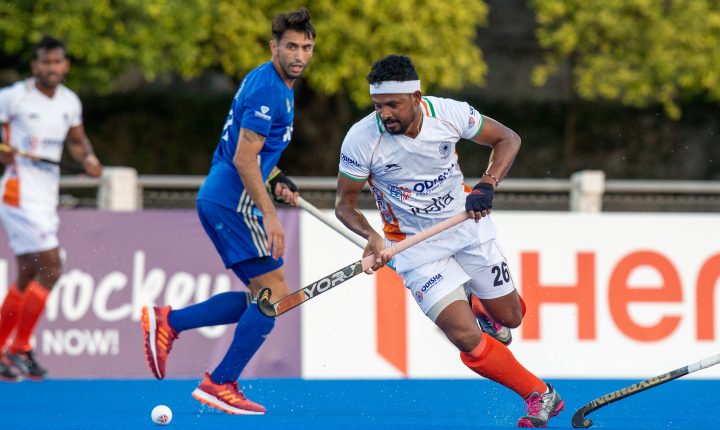 Jakarta: India Men’s Hockey Team will open their campaign at the Hero Asia Cup 2022 in a clash against rivals Pakistan at the GBK Sports Complex Hockey Stadium in Jakarta, Indonesia, on Monday (23 May, 2022). The defending champions India will be led by Olympic medallist Birendra Lakra with experienced striker and a veteran of four Asia Cups, SV Sunil, as his deputy.

As many as 10 players are likely to make their senior India debut in the Hero Men’s Asia Cup 2022. The squad includes Yashdeep Siwach, Abhisek Lakra, Manjeet, Vishnukant Singh and Uttam Singh, who made their mark at the FIH Hockey Men’s Junior World Cup 2021. Also new in the squad are Mareeswaren Sakthivel, Sheshe Gowda BM, Pawan Rajbhar, Abharan Sudev and S Karthi.

Speaking ahead of the contest against Pakistan, both Lakra and Sunil stressed on the need to guide the youngsters in the high-pressure game. “Both the teams are young. We specially have a very young team with just 2-3 senior players. So, we need to go match by match. If we get a good result, and we perform well, then our confidence level will also increase,” Lakra said.

India, Japan, Pakistan and hosts Indonesia are clubbed in Pool A while Malaysia, Korea, Oman and Bangladesh are grouped in Pool B in the Hero Asia Cup 2022, which is a World Cup qualifier event. Both India and Pakistan have won the prestigious tournament three times each, while South Korea is the most successful team having clinched the title four times out of 10 previous editions.

Speaking on India’s preparation for the tournament under the guidance of Coach Sardar Singh, Lakra said, “Our preparation has been good. We played a few practice matches where we tried out a few new things. The environment in the team is quite a positive one.”

“It is not an easy tournament but if we play according to our plans, motivate youngsters, we can win. Every team is good and has come prepared because all teams know World Cup berth is at stake here. So, we are not going to take any team lightly,” Sunil added.

After Pakistan, India will play Japan on May 24 before playing hosts Indonesia on May 26.

Please find attached photos of Birendra Lakra, SV Sunil and the schedule of the tournament.

India will take on Pakistan in Pool A match on May 23rd at the GBK Sports Complex Hockey Stadium in Jakarta, Indonesia at 1700 hrs IST. The match will be telecast live on Star Sports First + Star Sports Select 2 SD + HD and on Disney + Hotstar.