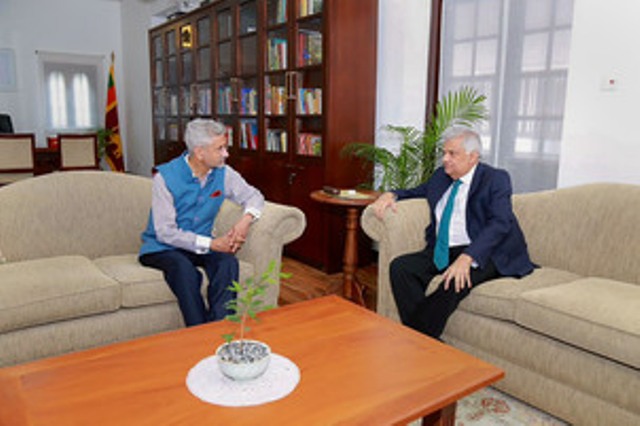 Colombo: External Affairs Minister S Jaishankar announced on Friday that India has given the required assurances to debt-ridden Sri Lanka for the much-needed IMF bailout package, becoming the first major lender to publicly back the island nation’s efforts to recover from its worst-ever economic crisis.

Jaishankar, who is here on a two-day visit, called on President Ranil Wickremesinghe on Friday morning and also held talks with Foreign Minister Ali Sabry.

“My primary purpose to visit Colombo is to express India’s solidarity with Sri Lanka during these difficult moments,” Jaishankar said in a press statement along with Sabry.

“We’ve had a very good discussion that follows up on my meetings with my counterpart and other Sri Lankan ministers yesterday (Thursday) evening,” he said.

India has extended about USD 4 billion in terms of credits and rollovers to help Sri Lanka get through its worst economic crisis since independence in 1948.

“For us, it was an issue of the Neighbourhood First and not leaving a partner to fend for themselves. This year, in a developing situation that was beginning to cause concern, the same sentiment reasserted itself,” Jaishankar said.

India felt strongly that Sri Lanka’s creditors must take proactive steps to facilitate its recovery, he told the media in the presence of President Wickremesinghe.

“India decided not to wait for others, but to do what we believe is right,” he added.

“We extended financing assurances to the IMF to clear the way for Sri Lanka to move forward. Our expectation is that this will not only strengthen Sri Lanka’s position but ensure that all bilateral creditors are dealt with equally,” he added.

Here’s Why Maple Syrup Is Good For You

Hope, Everything Will Be Alright: Humane Sagar