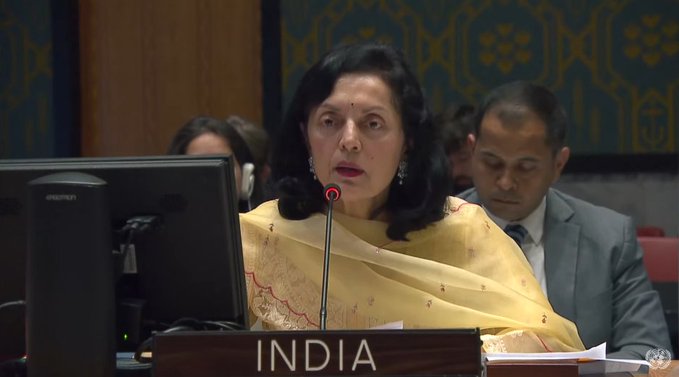 The shelling at the Zaporizhzhia Nuclear Power Plant, which is under Russia’s control since March, came ahead of a United Nations Security Council (UNSC) meeting on Thursday to address concerns regarding the facility’s safety.

Both Ukraine and Russia have accused each other of striking the compound on Thursday and last week.

Addressing the UNSC briefing on Thursday, India’s Permanent Representative to the UN Ruchira Kamboj said that India calls for mutual restraint so as not to endanger the safety and security of nuclear facilities.

Kamboj added that India is following developments regarding the safety and security of Ukraine’s nuclear power reactors and facilities.

She said India attaches high importance to ensuring the safety and security of nuclear facilities, as any accident involving them (nuclear facilities) could potentially have severe consequences for public health and the environment.

“We have noted the latest information available with regard to the nuclear power plants and facilities in Ukraine, including the updates published on August 9 and 10 by the International Atomic Energy Agency (IAEA), and today’s updates on developments,” Kamboj said during the UNSC briefing.

She reminded the security council that ever since the war between Russia and Ukraine started, India consistently called for an immediate cessation of hostilities and an end to violence.

“While we are discussing the nuclear dimension of this conflict, we need also to be acutely cognizant of the impact of the Ukraine conflict on developing countries, particularly, on the supply of food grains, fertilizer and fuel,” India’s Permanent Representative to the UN added.

Apart from Ruchira Kamboj, the UN’s secretary-general Antonio Guterres called on Russia and Ukraine to halt all fighting near the plant.