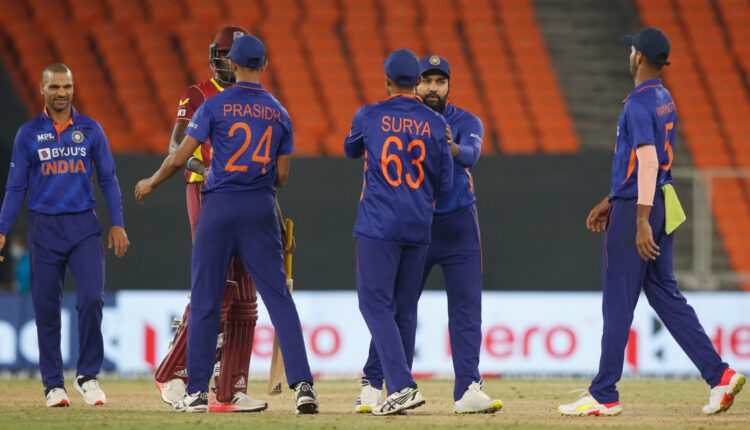 Ahmedabad: India defeated West Indies by 96 runs in the third ODI and completed a 3-0 clean sweep vs West Indies at the Narendra Modi Stadium on Friday.

Prasidh Krishna and Mohammed Siraj were in fantastic form and took three wickets each for India’s bowling department.

Stand-in captain Nicholas Pooran, who failed in the first 2 matches, showed some responsibility but he was not able to carry and get a big one even as wickets were falling around him.

Openers Shai Hope and Brandon King failed yet again as they managed just 85 runs between them across the 3 matches while senior batter Darren Bravo finished the series with 39 runs in 3 outings, bringing to light the top-order struggles that the West Indies have been going through for quite some time in ODI cricket.

The hosts have already won the three-match series by taking an unassailable 2-0 lead.  India won the toss and opted to bat first in the third and final one-day international against West Indies on Friday.

Earlier, the fifties from Rishabh Pant and Shreyas Iyer combined with contributions from the lower-order helped India post 265 on a two-paced wicket.

After another top-order failure, it was Iyer and Pant who staged India’s recovery by scoring 80 and 56 respectively.

Pacer Jason Holder was the pick of the bowlers for West Indies, taking four wickets for 34 runs in eight overs.