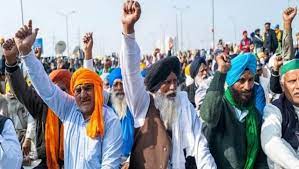 London: India has condemned the debate by some British lawmakers concerning the ongoing farmers’ protest in the country.

It said the debate on Monday inside the British parliamentary premises was based on ‘false assertions’ in a ‘distinctly one-sided discussion’.

“We deeply regret that rather than a balanced debate, false assertions — without substantiation or facts — were made, casting aspersions on the largest functioning democracy in the world and its institutions,” the High Commission of India in London said in a statement.

Earlier report said the debate was held in response to a petition which had over a lakh signatory. Interestingly, the Indian High Commission’s response came even after lawmakers, including Foreign, Commonwealth and Development Office (FCDO) Minister Nigel Adams said that the farm laws were ‘India’s domestic matter’.

Adams said the UK government has underlined the importance of UK-India relations and said that London and New Delhi are working as a force for the good at the United Nations Security Council (UNSC). But, it does not prevent us from raising difficult issues, he added.