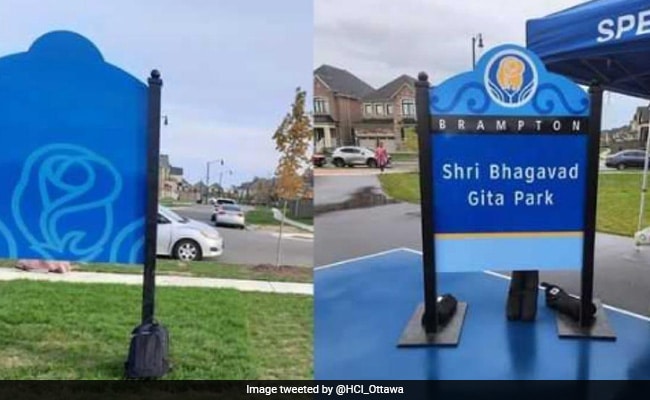 New Delhi: India today condemned the vandalisation of a park sign at a park in Canada named after the Bhagavad Gita. Calling it a “hate crime”, the Indian High Commission in Canada demanded a probe into the matter.

“We condemn the hate crime at the Shri Bhagvad Gita Park in Brampton. We urge Canadian authorities and Peel Police to investigate and take prompt action on the perpetrators,” the High Commission of India in Ottawa said in a tweet.

Earlier today, the news was confirmed by Brampton Mayor Patrick Brown. Condemning the incident, Mr Brown said, “We have zero tolerance for this.”

The event comes just 10 days after India issued an advisory for Indian nationals and students in Canada to remain vigilant as there was a “sharp increase in hate crimes and anti-India activities.”

The Foreign Ministry said it has taken up incidents of hate crimes, sectarian violence and anti-India activities with Canada and has asked for investigation and action. “The perpetrators of these crimes have not been brought to justice so far in Canada,” said a ministry statement.

Canada is home to 1.6 million people of Indian origin and non-resident Indians.

This year, there have been at least two incidents of attacks on Hindu temples in the country. On September 15, a temple was defaced with anti-India graffiti.