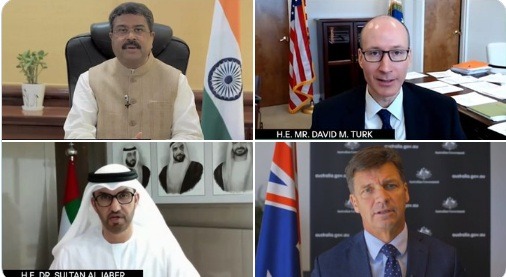 New Delhi: Union Minister Dharmendra Pradhan said various initiatives with respect to the greater use of hydrogen in India’s energy mix as the roadmap for the country.

Addressing the Hydrogen Round Table on “Hydrogen Economy: New Delhi Dialogue – 2021”, he said India is blending hydrogen with compressed natural gas for use as transportation fuel as well as an industrial input to refineries.

Pradhan said that Energy is integral to support our fast-growing economy, and India is developing an energy sector which will be growth-centric, industry-friendly and environment-conscious. He said that we have the onerous task of ensuring energy justice and to end energy poverty in the country.

The Union Minister said that the contours of India’s energy transition are changing fast and added that Prime Minister of India Narendra Modi has outlined a new energy map of India in October last year with seven key drivers.

The minister said that the Government is developing a clear roadmap for a self-reliant India or an AatmaNirbhar Bharat, which seeks to place India as a manufacturing hub well-integrated with global supply chains.

Pradhan said that hydrogen has great potential to emerge as a future source of energy. The Minister said that India remains committed to environmental and climate causes with a massive thrust on deploying renewable energy and energy efficiency measures.

The Minister announced that India, with its steadfast efforts towards leading the energy transition, backed by robust political will, is committed to engage with partners for ushering-in the hydrogen economy.