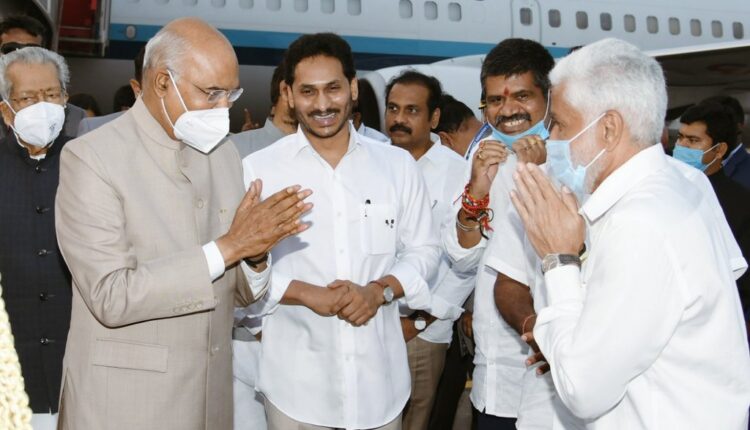 India Believes In ‘Security & Growth For All In The Region’ : President Kovind

Vizag: India believes in ‘Security and Growth for All in the Region’ to focus on cooperative measures for sustainable use of oceans, said the President of India, Ram Nath Kovind.

He was speaking on the occasion of Presidential Fleet Review-2022 at Visakhapatnam, Andhra Pradesh today (February 21, 2022). The President said that a large part of global trade flows through the Indian Ocean Region.

A significant portion of our trade and energy needs are met through the oceans. Safety of the seas and of the maritime commons, therefore, remains a critical requirement. The Indian Navy’s constant vigil, prompt response to incidents and untiring efforts have been highly successful in this regard.

The President noted that during the Covid-19 pandemic, the Indian Navy has been providing aid to friendly nations by supplying medicines and evacuating stranded Indian citizens and foreign nationals in different parts of the world under ‘Mission SAGAR’ and ‘Samudra Setu’.

He said that the prompt and effective deployment of the Indian Navy in the times of crisis has underscored India’s vision of being the ‘Preferred Security Partner’ and ‘First Responder’ in the Indian Ocean Region.

Pointing to the historical importance of Visakhapatnam, also popularly known as Vizag, the President said that it has been an important port for centuries. Its strategic importance is underlined by the fact that the headquarters of the Eastern Naval Command of the Indian Navy is located Vizag.

He said that Vizag made a glorious contribution during the 1971 war. He recalled the heroic action of the Eastern Naval Command in the naval blockade of the then East Pakistan and the sinking of Pakistan’s submarine ‘Ghazi’. He said that that was a decisive blow to Pakistan. The 1971 war remains one of the most emphatic victories in our history, he added.

The President was happy to note that the Indian Navy is becoming increasingly self-reliant and has been at the forefront of the ‘Make in India’ initiative. He noted that about 70 per cent of the contents of several warships and submarines under construction in various public and private shipyards across the country are indigenous.

He said that it is a matter of great pride that India has built nuclear submarines and soon we would have our indigenously built aircraft carrier, ‘Vikrant’, joining the service. He added that the development of indigenous naval shipbuilding capabilities is an impressive contribution to the making of an ‘Atmanirbhar Bharat’.

The President congratulated the Indian Navy for the splendid conduct of the Fleet Review, overcoming all challenges and restrictions imposed by the pandemic. He said that as the Supreme Commander of the Armed Forces, this is a moment of immense satisfaction for him. The nation is proud of our brave navy personnel.

The President of India as the Supreme Commander of the Armed Forces reviews the Indian Naval Fleet once in his/her term as part of the ‘President’s Fleet Review’.