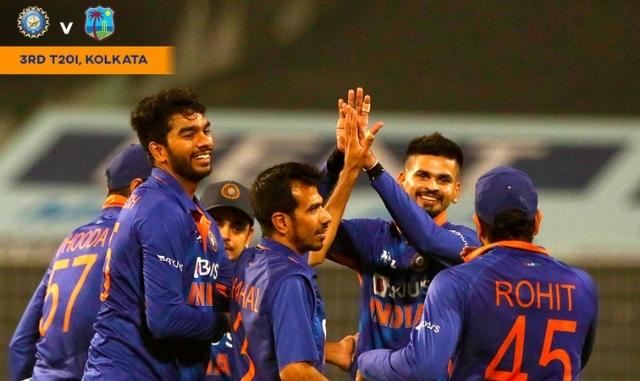 Kolkata: India clinched another sweep over the West Indies beating the visiting team by 17 runs in the ongoing third and final T20I at the Eden Gardens in Kolkata.

Chasing a target of 185, West Indies were eight wickets down after Nicholas Pooran was dismissed on 61.

Venkatesh Iyer and Harshal Patel struck in quick successions to put India in the driving seat.

Iyer dismissed Pollard in the 9th over before removing Jason Holder in the 11th over, putting West Indies five wickets down.

Chahar struck in the final ball of the first over to remove Kyle Mayers before also giving Shai Hope his marching orders. Chahar, however, had to limp off the ground after tweaking his hip.

Earlier, Suryakumar Yadav scored a fine 31-ball 65 as India managed to post a total of 184 for five.

Suryakumar Yadav shone with a stunning 31-ball 65 as India posted 184 for 5 in 20 overs. Surya and Venkatesh Iyer added 91 runs in just 35 balls as India got the much-needed late impetus after a top-order failure.

Earlier, Rohit Sharma, who dropped himself down to No. 4 could not get going after Ruturaj Gaikwad failed at the top.