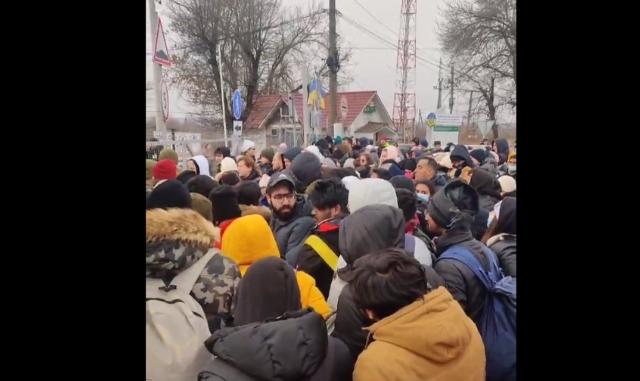 New Delhi: The Indian embassy on Sunday advised the Indian diaspora to move away from regions of active conflict to the western regions.

The embassy highlighted that citizens should venture out only after the curfew is lifted.

Taking to Twitter, the embassy informed that Ukraine Railways is additionally organising emergency evacuation trains at no cost, on first come first serve basis from Kyiv. The schedule of the trains can be found at stations.

“As and when the curfew is lifted, and there is considerable movement of people in your respective neighbourhoods, Indian nationals are advised to use nearby railway stations for movement out of regions of active conflict and proceed towards the western regions,” the Indian Embassy said.

They further added, “The transportation mode of Railways is operational and safer. If tickets are available on regular trains, they may be booked. In addition, Ukraine Railways is also operating special trains for evacuation of people free of charge, on first come first basis at the Railway station for which tickets are not required.

“Preference at railway stations is being given to children, women, and elderly people,” the advisory noted.

In a separate tweet, the Indian Embassy emphasised that the citizens should move out only after curfew is lifted.

“Based on latest inputs, intense fighting is underway in Kharkiv, Sumy, and Kyiv. It is reiterated, Indian nationals in these cities, and other cities wherever curfew has been applies, ar NOT advised to venture towards railway stations until curfew ha sben lifted and considerable civilian movements is renewed,” the advisory noted.

The Indian embassy in Kyiv has also advised residents to carry only essentials in a rucksack or a bag, along with cash. They have been asked to wear heavy winter clothing for warmth at night.

The Indian Embassy noted, “Those who judge that the situation is not conducive for travel, or are unable to leave due to any reason, may wait until further developments, may also plan accordingly by remaining in groups, keeping enough essentials, following existing instructions on safety and security.”