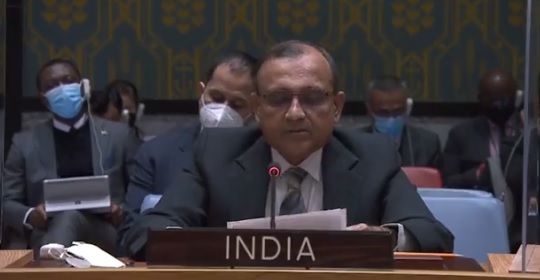 New Delhi: India on Wednesday abstained on a UN General Assembly resolution that strongly deplored Russia’s aggression against Ukraine, the third abstention in less than a week by the country in the world body on resolutions on the escalating crisis between Moscow and Kyiv.

The 193-member General Assembly Wednesday voted to reaffirm its commitment to the sovereignty, independence, unity and territorial integrity of Ukraine within its internationally recognized borders and “deplores in the strongest terms” Russia’s aggression against Ukraine.

He said: “India supports the international community’s call for an immediate ceasefire. We also support safe humanitarian access to conflict zones. We remain firm in our conviction, that differences can only be resolved through dialogue and diplomacy.”

This was the fourth abstention by India on a vote on the Ukraine issue at the UN — the other three at the Security Council where India is an elected member.

While Sri Lanka and Bangladesh in the neighbourhood abstained, Nepal, Maldives, Bhutan and Afghanistan voted in favour of the resolution against Russia. There was some embarrassment for Moscow as it found support only from Eritrea, Belarus, North Korea and Syria in voting against. That the resolution had widespread support was evident from the fact that it was co-sponsored by close to 100 countries.

WHO warns of sharp rise in Covid-induced anxiety, depression worldwide; Wake-up call to all countries