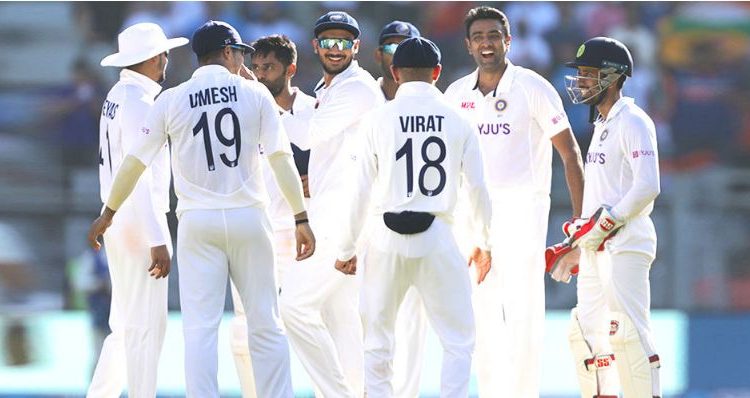 Mumbai: Wankhede Stadium is going to witness an early test win for team India as the visitors–New Zealand again failed to convert a good total in their second innings on Sunday.

The hosts need just 5 wickets to win the match and clinch the series as New Zealand reached 140 for 5 at stumps with Henry Nicholls (36*) and Rachin Ravindra (2*) at the crease till the close of play.

Meanwhile, Daryl Mitchell so far has been the top-scorer for the visiting team with his 60-run knock and added 73 runs for the fourth wicket with Henry Nicholls (36 not out) before he was dismissed by Axar Patel.

Ashwin picked up 3 wickets for 27 runs from his 16 overs while Axar bagged one for 40 to leave the tourists reeling on Day 3.

Resuming the third day on 69-0, India openers Mayank Agarwal and Cheteshwar Pujara extended their partnership to 107 before Ajaz sent the former back.

Regular opening batter Shubman Gill, who did not bat at his usual position on Saturday after suffering a blow to his right elbow while fielding, also missed out on a half-century by getting out on 47 as did India captain Virat Kohli, who made 36.

Another 212 COVID-19 patients recover in Odisha