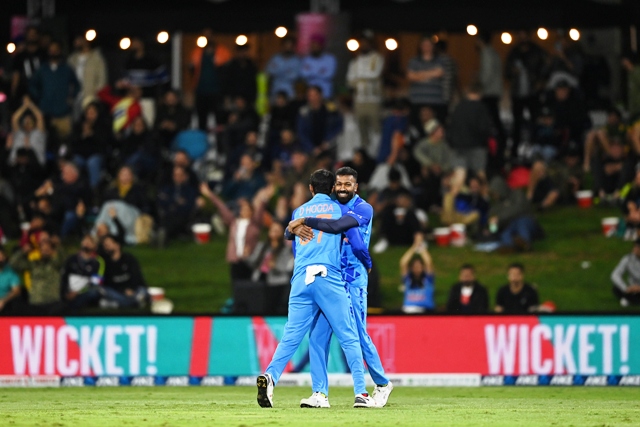 India bundle out New Zealand for 126 runs to clinch the second match by 65 runs in the three-match T20I series here at Bay Oval in Mount Maunganui on Sunday.

Defending a competitive target of 192, Bhuvneshwar Kumar struck on the second ball of the chase as he dismissed Finn Allen for two balls duck. The right-handed batter and captain Kane Williamson then came out to bat and the batter kept piling runs along with the opener Devon Conway.

In the 7th over of the innings, Williamson hammered Washington Sundar for 17 runs while slamming back-to-back one four and a six. However, Sundar made a stunning comeback as he bagged the wicket of well-set batter Devon Conway 25 off 21. Glenn Phillips then came out to bat and the batter slammed a four on the very first ball he faced but his stint at the crease did not last long as he was dismissed by Yuzvendra Chahal for 12 off 6. At that point, New Zealand were tottering at 70/3.

The right-handed batter Daryl Mitchell then came out to bat. New Zealand batters looked helpless in front of great spells of Indian bowlers as they binded Kiwis from scoring runs. Deepak Hooda then gave New Zealand another blow as he sent Mitchell packing for 10 off 11 in the 13th over of the game.

James Neesham then came out to bat but could not do much as he fell to a three-ball duck. Williamson then tried to handle struggling New Zealand as he pulled some boundaries to ease the pressure. Even in the pressure situation New Zealand skipper Williamson stand strong in front of the Indian bowling attack he slammed a much-needed fifty in 48 balls.

In the 18th over of the innings, Williamson slammed one six and four but his stint at the crease was cut short as he was sent back to the pavilion by Mohammed Siraj after playing a stunning knock of 61 off 52. In the 19th over of the game, Hooda struck thrice as he dismissed Ish Sodhi, Tim Southee and Adam Milne. India folded New Zealand for 126 in 18.5 over to win the match by 65 runs.

Earlier, Suryakumar’s batting masterclass of unbeaten 111 guided India to a competitive total of 191/6 against New Zealand. Suryakumar was the top-scorer for India as he slammed 111 runs in just 51 balls while Ishan Kishan scored 36 off 31. New Zealand star bowler Tim Southee bagged his career’s second hattrick as he dismissed Hardik Pandya, Deepak Hooda and Washington Sundar.

Lockie Ferguson was proven to be a little expensive for Kiwis as the pacer bagged two wickets while conceding 49 runs in his 4 overs.