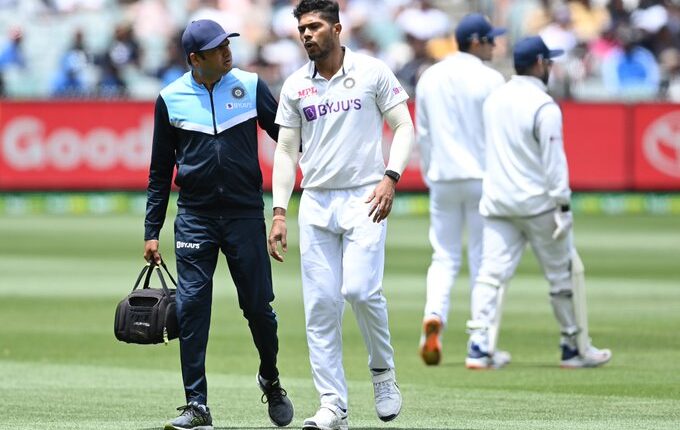 Melbourne: Bowler Umesh Yadav hurt his calf muscle while bowling during Day 3 of India vs Australia Test match in Melbourne. Umesh hobbled off the field and looked to be in some sort of discomfort.

“Umesh Yadav complained of pain in his calf while bowling his 4th over and was assessed by the BCCI medical team. He is being taken for scans now,” tweeted BCCI.

Umesh, 33, was in the middle of a fine spell when he experienced pain in his left leg and called for immediate medical attention. He later limped back to the dressing room.

Umesh had dismissed opener Joe Burns with a peach of a delivery in only his second over earlier. Debutant pacer Mohammed Siraj completed what was the eighth over of the innings.

India are already missing the services of seasoned pacers Mohammed Shami and Ishant Sharma and the latest injury would add to the visiting team’s woes in the four-match Test series.

Earlier, Rahane and Jadeja had put India in the drivers’ seat against Australia at stumps on day two. The hosts might have scalped wickets of India’s top-order, but in the final session of day two, Rahane and Jadeja showed grit and determination to give India firm control of the match.

On day one, India had bundled out Australia for 195 as Jasprit Bumrah scalped four wickets while Ashwin took three wickets.