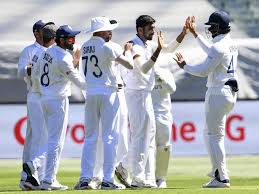 Ind Vs Aus 2nd Test: Australian Team All Out On 195 Runs In First Innings

Melbourne: The Australian team managed to score just 195 runs on the 1st day of the second test match against India.

Skipper Ajinkya Rahane had a great day as he marshalled his resources impressively with debutant Mohammed Siraj (2/40 in 15 overs) repaying the faith shown in him with wickets of Marnus Labuschagne (48) and Cameron Green (12) with the old ball.

The hosts opted to bat after skipper Tim Paine won the toss.