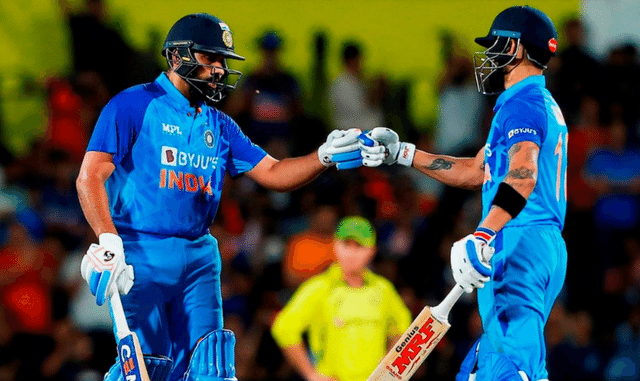 Chasing a target of 91 runs, Rohit Sharma’s unbeaten 46 propelled India to a six-wicket win against Australia in the second T20I at the VCA Stadium in Nagpur.

Rohit Sharma batted in his own world while wickets fell around him. Matthew Wade’s 43 off 20 balls led Australia to a score of 90/5 in a match that was reduced to an eight overs a side contest due to a two-hour delay caused by a wet outfield.

Rohit responded by scoring an unbeaten 46 off 20 balls and leading the Indian chase with brief cameos from KL Rahul, Virat Kohli and Hardik Pandya.

Dinesh Karthik finished the match by hitting a six and a four off the first two balls of the last over, which were the only ones he faced in the entire match. The three-match series is now level 1-1.

After the match was reduced to eight-overs-per-side, India opted to bowl first. The toss was earlier delayed due to a wet outfield.