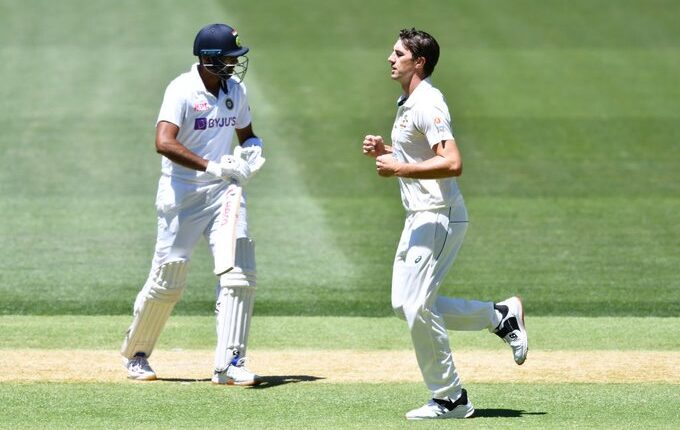 IND vs AUS 1st Test Day 2: India Bundles Out For 244 In First Innings Against Australia

Sydney: On Day 2 of the first Test of four-match series, India bundled out for 244, adding only 11 runs to overnight score against Australia in the first innings at Adelaide Oval today.

After conceding an early advantage a day before, Team India slumped from 188-3 to 233-6 at stumps on Day 1.

The visitors ended the opening day with a score of 233 for six, following a collapse triggered by the dismissal of Virat Kohli. The Indian skipper was dismissed for 74 runs off 180 deliveries in an innings comprising of eight boundaries, after a big mix-up with Ajinkya Rahane.

Australia bounced back on the first day of the first Test against India by picking three late wickets, including those of captain Virat Kohli (74), Ajinkya Rahane (42) and Hanuma Vihari (16) in just over six overs for 18 runs to leave its opponents on 233 for six at stumps.

Soon after Kohli’s dismissal, Australia called for the second new ball and got rid of Rahane, leg-before to Mitchell Starc, and Hanuma Vihari who was leg-before to Hazelwood.

India, at 206 for six looked like getting bowled out before stumps. However, R Ashwin and Wriddhiman Saha added 27 in 34 balls for the seventh wicket and remained unbeaten at the end of the day.