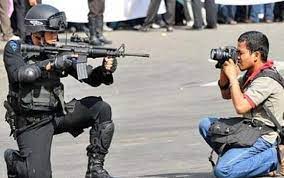 Increased Cases Of Violence Reported Against Journalists Under Taliban

Kabul: Dozens of cases of violence against media persons have emerged in Afghanistan and in the past two days, Reporters Without Borders (RSF) said.

According to reports, after the Taliban took poawer over Afghanistan, a sharp increase in violence against journalists has been reported.

RSF’s Afghanistan desk head Reza Moini said that the Taliban detained 24 journalists in the past 48 hours. However, later they were released, TOLO news reported.

Afghanistan’s Etilaatroz newspaper in Kabul said the Taliban detained five of its reporters on Wednesday while covering a women’s protest and gathering news.

According to TOLOnews, Etilaatroz added that the two of the reporters who were detained during the protest were beaten by the Taliban badly and they were hospitalised.

The Taliban accepted that such incidents had occurred and vowed to prevent such activities in the future.