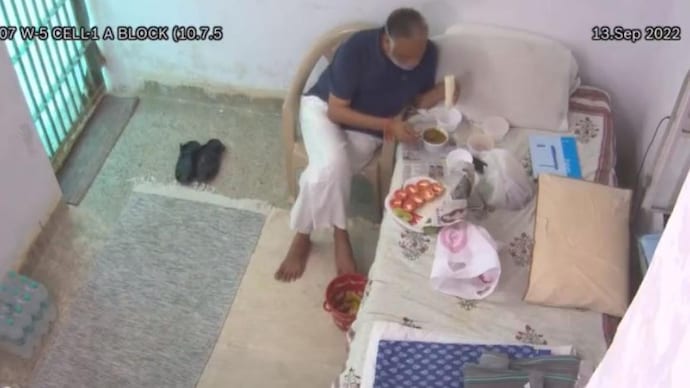 New Delhi: A new footage of jailed AAP minister Satyendar Jain has come to the fore where he can be seen getting proper meals inside the Tihar Jail.

In the video, Jain can be seen beginning an elaborate meal with appetizers and moving on to salads and other delicious and nutritious food items. The video showcases a man who is constantly at his service, right from bringing in food to keeping a dustbin near his chair. Packaged drinking water bottles also can be seen in his room.

One more video from media! After taking maalish from rapist & calling him PHYSIO therapist, Satyendra Jain can be seen enjoying sumptuous meal! Attendants serve him food as if he is in a resort on vacation!

The video comes at a time when Jain had claimed that he was not getting privileges like proper food and medical check-ups in Tihar jail.

The video emerged a day after the Rouse Avenue Court sought a response from the Tihar jail authorities over Delhi minister Satyendar Jain’s plea seeking a fruit-salad diet inside Tihar jail as per his religious beliefs. The application filed in court said that he was not given “Jain food” and access to the temple. The AAP leader said that he does not eat regular food without going to the temple, and he was on a diet of fruits and salads.

On Tuesday, Jain submitted in court that he was not getting any privilege in jail. In fact, he was deprived of facilities like proper food and medical check-ups that he is supposed to get, he said. “I have lost 28 kg in jail. Is this what a privileged person in jail gets? I’m not even getting proper food. What privilege are they talking about? No prison rules are violated if an undertrial is pressing his hand or feet,” the minister submitted in the court through his lawyer Rahul Mehra.

“Even Ajmal Kasab got a free and fair trial,” Jain’s lawyer submitted. “I am surely not worse than that. All I seek is a fair and free trial. Please look at the kind of media reports that are running against him and that is in their interest,” Mehra added.

There Should Be Marriage Between Tune & Verse To Form Great Composition: Prasoon Joshi