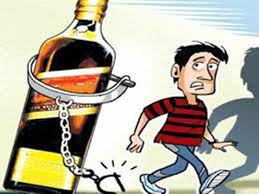 Sambalpur: In a major crackdown, police have arrested one person and seized 8 litres of illicit liquor at Rairakhol in Sambalpur district.

The accused person has been identified as Pramod Kumar Sahoo (33) of Simlipal area under Naktideul block in the district.

Acting on a tip-off, police intercepted the bike and seized 8 liters of country-made liquor. The cops also arrested the accused and registered a case no (07/2021) in this regard. He has been forwarded to the court, sources said.