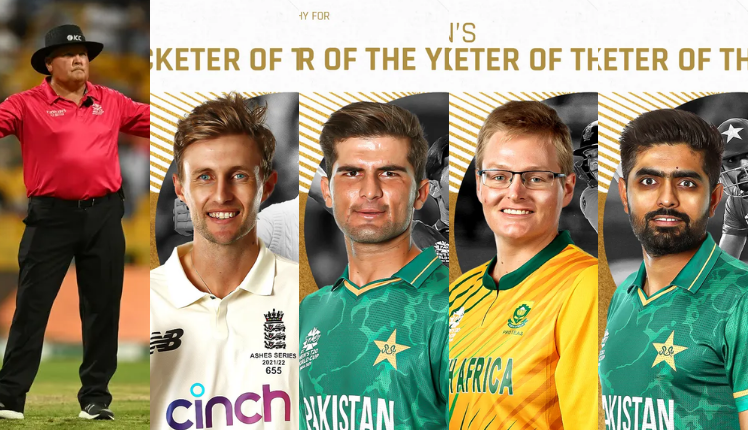 Dubai: As part of the 2021 edition of the ICC Awards, the International Cricket Council (ICC) announced England’s Joe Root as the ICC Test Cricketer of the Year 2021 for his consistent performance across the format in 2021.

In 2021, Root amassed 1708 runs in 15 matches which included six centuries. He was in sublime form, as he became only the third player in the history of the game to aggregate over 1700 runs in Test cricket in a calendar year joining the elite club of Mohammad Yousuf and Sir Vivian Richards ahead of him.

Root’s 218 in the first Test of the four-match series against India in Chennai was a masterclass in batting. He tackled a quality bowling attack, both pace and spin, with ease and continued his form from the series in Sri Lanka.

Pakistani pacer Shaheen Afridi as the recipient of the Sir Garfield Sobers Trophy for the ICC Men’s Cricketer of the Year 2021.

Afridi has had a fabulous 2021 across all three formats of the game. He took 78 wickets in 36 internationals at an average of 22.20. His contribution in the Test and T20I formats of the game was phenomenal. At the ICC Men’s T20 World Cup, Afridi took seven wickets in six matches aiding Pakistan formidably to make it to the semi-finals of the tournament.

In the Test format, Afridi remained consistent and claimed 47 wickets in only nine matches at a staggering average of 17.06. His most memorable performance was at the high stakes game against India at the ICC Men’s T20 World Cup. He claimed three wickets in that match which included the wickets of opening pair Rohit Sharma and KL Rahul and that of India captain Virat Kohli in the death overs.

Lizelle Lee of South Africa and Babar Azam of Pakistan as the ICC ODI Cricketers of the Year 2021across women’s and men’s international cricket respectively.

Lizelle Lee has had an outstanding year in ODI cricket. She scored 632 runs in 11 matches at an average of 90.28 that included a century and five half-centuries. Lee also finished as the highest run-scorer in 2021 in fifty over format. In South Africa’s tour of India, Lee was unstoppable, contributing with big runs in the 4-1 series win for her team. With 288 runs, including a hundred and two fifties, she ended the series as the highest run-scorer and was also awarded the Player of the Series. Lee scored the highest individual ODI score of her career at 132* in the third match of the series against India. She carried her form over to the series against West Indies and was once again the top run-getter in the series.

As part of the 2021 edition of the ICC Awards, the International Cricket Council (ICC) announced Marais Erasmus as the ICC Umpire of the Year 2021.

Officiating in the ICC Men’s T20 World Cup final between Australia and New Zealand, Marais Erasmus has led the way in his officiating, earning the respect of his peers and the international cricket fraternity.

The 2021 ICC Umpire of the Year Award sits alongside his successive Dave Shepherd Trophies, won in 2016 and 2017. On top of the ICC Men’s T20 World Cup final, Erasmus has overseen 20 international fixtures across all the three formats in 2021.

Erasmus, a member of the Emirates ICC Elite Panel of Umpires, recently officiated in his 100th ODI, when he took the field in the first ODI between South Africa and India in Paarl last week.