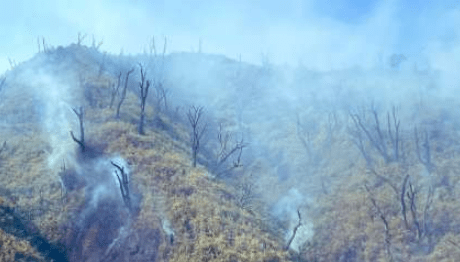 New Delhi: The Indian Air Force has send its Mi-17V5 helicopter to tame a massive wildfire in Dzukou Valley, a popular trekking destination on the Manipur-Nagaland border.

The helicopter was launched on the basis of a requisition by the Nagaland government.

“The helicopter is equipped with Bambi Bucket for fire-fighting in Dzukou Valley near Kohima,” Wing Commander Ratnakar Singh said on Thursday.

The Nagaland State Disaster Management Authority had on December 30 confirmed the wildfire but the cause and extent of damage could not be ascertained.

Strong winds and ambient dryness are said to be the factors behind the fire spreading fast.

Dzukou, about 30 km from Kohima, is a sanctuary for the endangered Blyth’s tragopan – Nagaland’s State Bird – and other species of birds and animals.