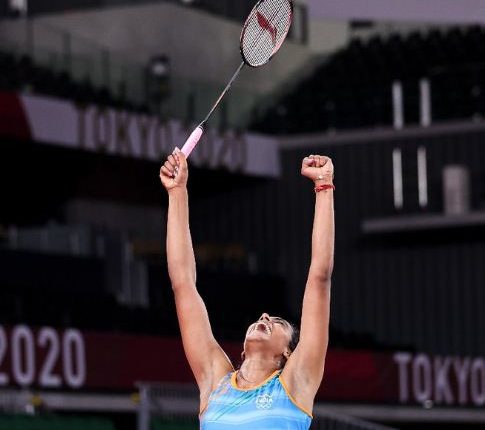 Tokyo: Clinching her second Olympic medal at Tokyo Olympics, PV Sindhu became only the 4th female shutter to win 2 Olympic medals in singles badminton and said that she had worked hard for so many years to make herself capable for this level.

Moments after winning the bronze medal, PV Sindhu said the Tokyo Olympics campaign was tougher and the bronze was a tough nut to crack than her silver at the Rio Olympics.

In an interview with BWF, Sindhu said, “It makes me feel really happy because I’ve worked hard for so many years. I had a lot of emotions going through me – should I be happy that I won bronze or sad that I lost the opportunity to play in the final?”

“But overall, I had to close off my emotions for this one match and give it my best, my all and think about the emotions. I’m really happy and I think I’ve done really well. It’s a proud moment getting a medal for my country,” Sindhu told BWF.

Sindhu needed only 53 minutes to beat the higher-ranked He Bingjiao and script history. She was at her aggressive best, hammering down smashes and dominating the rallies, showcasing that she is truly a big-match player.