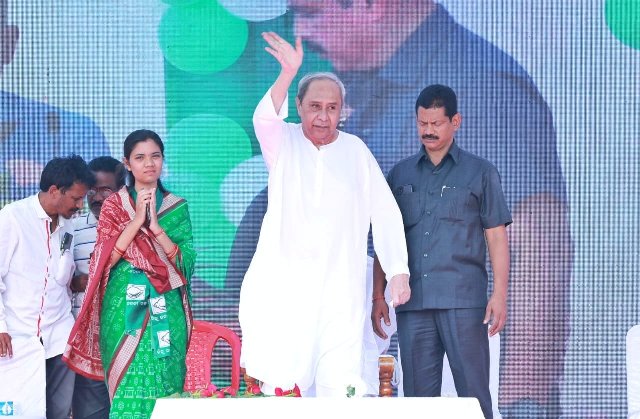 “I Believe In Work Instead Of Word”: CM Naveen Flays BJP For Misleading People

He said BJP is shedding “crocodile tears” for the poor by telling lies.

While addressing two election rallies at Jharbandh and Paikmal blocks of Padampur assembly seat, Patnaik said BJP leaders are indulging in petty politics over issues of the poor like the PMAY.

“Though the state government secured a prize from the central government for completing five lakh houses under Prime Minister Awas Yojana (Gramin) per year, the BJP MPs with political motives exerted pressure and stopped the scheme. This deprived ten lakh people of houses,” he said.

Patnaik, however, did not utter a word against the Congress in the two meetings and asserted that he believes in work instead of words.

In between the two meetings he met representatives of the Meher and Kulta communities who thanked him for providing them land and funds for building a building in the name of poet Gangadhar Meher and a dharamshala respectively. He also met members of the Yadav and Teli communities and received about 50 petitions from the people about the various difficulties faced by them.

The BJD, he said, is resolved to fight for the rights of kendu leaf pluckers, farmers, tribals, women and the downtrodden in Padampur, which has a large tribal population.

Kendu leaf plucking is a major economic activity for the landless and the poorerst of the poor in Padampur which falls in the western district of Bargarh.

Accusing the BJP-led government at the Centre for imposing high rate of GST on trade in kendu leaf, he said, “Do you know the GST on gold? It is only three per cent, while the Centre unfortunately charges 18 per cent GST on kendu leaf trade. The BJP has been shedding crocodile tears for the poor, the kendu leaf pluckers, farmers and others,” Patnaik alleged.

The chief minister blamed BJP for delay in payment of crop insurance under Pradhan Mantri Fasal Bima Yojana and said many farmers in Padampur have not received their insurance claims so far. “When the aggrieved farmers stopped the BJP candidate Pradip Purohit from filing the nomination paper for the by-poll, the NDA government released the funds within 48 hours,” he said.

Condemning the BJP leaders for their alleged “defamatory words” against BJD’s woman candidate in Padampur, Barsha Sing Bariha, he said “It is unfortunate to criticise a woman. I have fielded an educated woman. Bless her by casting votes in the conch symbol (of BJD)”.

Patnaik, who is also the BJD president, said the party aims at ensuring empowerment of women. He claimed that the women in the state are marching on the path of progress due to a number of steps taken by the BJD government. The self help group members were now set to become entrepreneurs with government announcing nil interest on loans of up to Rs five lakh.

The chief minister promised speedy development of Padampur and cited the development works in neighbouring Bijepur assembly segment. “My reply to the BJP, which asks me what is done for Padampur, is I will bring a list of development works being done in Padampur before the 2024 general election”.

He also countered BJP’s allegation that the proposed Bargarh-Nuapada road via Padampur could not be implemented due to the state government’s inaction. “The BJP leaders including two union ministers are telling lies and misleading people of Padampur”.

He did not name any central minister but was apparently referring to Union Agriculture Minister Narendra Singh Tomar and Railways Minister Ashwini Vaishnaw.

“The Railways is yet to conduct a survey and prepare a detailed project report. They have also not applied to the state government for land,” he added.