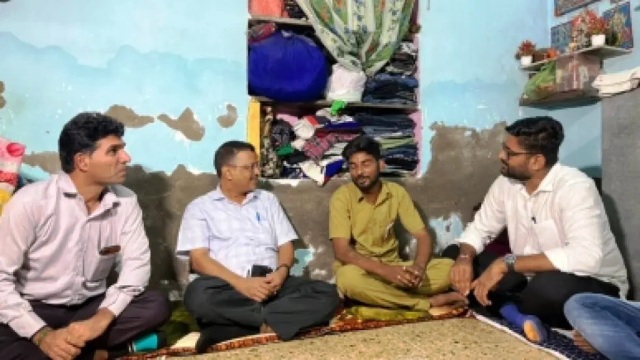 Ahmedabad: The Ahemadabad based auto-rickshaw driver who had recently invited Delhi Chief Minister Arvind Kejriwal to his house for dinner, on Friday said he is a big fan of Prime Minister Narendra Modi.

The auto driver identified as Vikram Dantani, was seen along with other BJP leaders donning a saffron scarf in Prime Minister Modi’s meeting here.

Responding to media queries, he said since he has turned adult, he will vote for the BJP in the upcoming Assembly polls.

He denied any association with the AAP, and backtracked from his statement that he liked Kejriwal.

Dantani said he had invited Kejriwal for dinner as auto-rickshaw union had asked him to do so and not out of choice.

On September 12, Kejriwal reached Dantani’s house in his auto-rickshaw in violation of Chief Minister’s security protocol and had dinner.

At that time, Dantani had told reporters that he was not “tutored”, he had invited Kejriwal because he liked him and he had seen a video of an auto-driver inviting Kejriwal for dinner in Punjab.