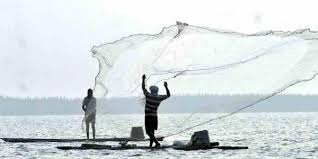 Boudh: Fishermen here on Monday caught a rare variety of fish weighing 25 kilograms in their fishing net from Mahanadi River in Boudh district.

The fish was caught by one Sripati Behera of Tutusinga village under Sadar block of Boudh district.

As per reports, Behera had gone for fishing in the nearby Mahanadi River early morning today when a huge the fish called ‘Buda’ by the locals entangled in his net. He brought it back to the village.

After the news spread, locals from Tutusinga village and nearby areas gathered to see the giant fish.

The giant fish was later sold at Rs 5,500 in a nearby market.

Earlier on October 2, an exotic and expensive variety of fish, locally known as Teleia, was caught by a fisherman in Chandanipal area of Dhamra in Bhadrak district. The huge fish weighed around 22 kilograms, was later sold at Rs 1,43,000.

India Suspends All Flights From UK Till Dec 31

Baba Akhandalamani Temple To Reopen For Devotees From Jan 3