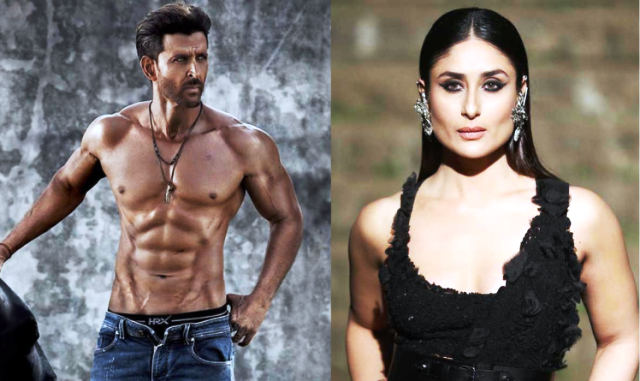 Hrithik Roshan and Kareena Kapoor Khan Approached For A Film Together: Report

Bollywood fans could be in for a treat as Hrithik Roshan and Kareena Kapoor Khan, who were the most adored pairs onscreen nearly two decades ago, might be seen together on the big screen once again with their magical chemistry.

The two have earlier starred in films like Kabhi Khushi Kabhie Gham, Main Prem Ki Diwani Hoon, Mujhse Dosti Karoge and Yaadien. Now, reports are abuzz that Hrithik and Kareena both have been approached for a film together by a renowned filmmaker and it will be produced by Junglee Pictures

A source close to the development revealed to BollywoodLife about the project that will be helmed by a prominent filmmaker and will be bankrolled by Junglee Pictures. The source added that the movie is still in the initial process and has been titled ‘Ulaj’.

The source went on to say that the director will be meeting Kareena Kapoor Khan soon for a script reading session after which everything might be finalized. The source said that Hrithik Roshan is yet to give a green signal for the movie and it heavily depends on his availability. The source furthermore revealed if both Kareena and Hrithik say yes to the project, then only the producer will go ahead with the budgeting part.

The reports further added that the film, Ulaj is touted to be a big-budget movie and will be going on floors outside Mumbai. However, that said, nothing has been finalized now and everything depends on Kareena Kapoor Khan and Hrithik Roshan giving their nods to the film. Well, if this project goes ahead, it will surely be a moment of rejoicing for the fans of the two.