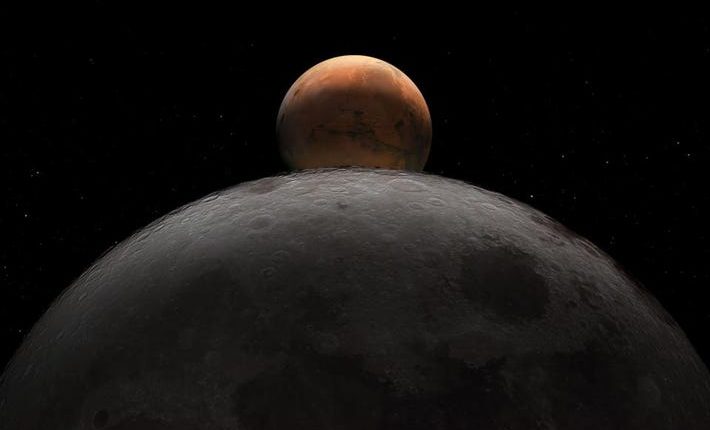 New Delhi: The moon will turn full as Mars arrives at opposition to the sun, resulting in an almost perfect alignment in space of the sun, Earth, moon and Mars.

It’s likely to be that way in the evening hours of Wednesday (Dec. 7). In fact, the moon will turn full at 11:08 p.m. EST (0408 GMT on Dec. 8) followed by Mars arriving at opposition to the sun just 87 minutes later. This will result in an almost perfect alignment in space of the sun, Earth, moon and Mars.

Opposition is the planetary equivalent of a full Moon. When a planet is close to the Earth, and on the opposite side of the Earth to the Sun, we say that planet is in opposition. In the same way that sunlight is fully reflected during the full Moon phase in the lunar cycle, the sunlight that shines on the planet is also fully reflected.

When is Mars in opposition?

Mars will reach opposition on 8 December 2022, when it will be at its brightest for the year, essentially creating a ‘full’ Mars. The Red Planet comes closest to Earth a week earlier, on 1 December. At this time, Mars will be just 81.45 million kilometres away from the Earth.

Opposition can occur at any point along Mars’ orbit, so the distance between Earth and Mars can vary year on year. If you remember the 2003 opposition, then you’ll also remember it was the closest approach in a whopping 60,000 years!

The precise time that Mars reaches opposition will be 5:42am on the morning of 8 December 2022, reaching an apparent magnitude of -1.9. From our point of view, Mars will appear brighter than Saturn in the night sky… however, we won’t be able to see it at this time. So if you want to spot Mars, the best time will be earlier that night, or in the evening of 7 December.

Mars will rise at 3:24am on Wednesday 7 December 2022 and will remain above the horizon until it sets at 8:15am on 8 December, as viewed from London (times will vary with location).

The next time Mars reaches opposition will be on 16 January 2025.

Where to see the moon eclipse Mars?

As a bonus, those who are located north and west of a line running roughly from Piedras Negras, Mexico to Louisville, Kentucky to Seabrook, New Hampshire will see the moon occult Mars. Refer to the US map. Those positioned south and east of this line, however, will see the moon miss the planet entirely, barely passing just above it (called an appulse).

When to see Mars occulted by the Moon?

How to see Mars at its biggest and brightest?latest newsMarsMars from earth