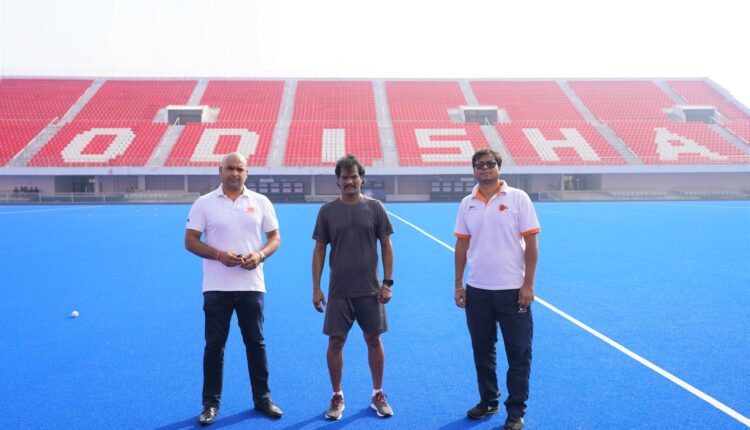 The trio surprised the young hockey players on the blue turf as they took on the sticks to share the tricks of the sport. They interacted and mingled with the young cadets and shared life learnings with them.

Sharing insights, with the cadets, from his time at the Olympics, Shri. Dhanraj Pillaisaid, “Never compare yourself with another, on any aspect. Only aim to better oneself at the game. Those times were different. Today, the turfs are equipped for better results. Follow the coach, learn the tricks, and constantly strive to better one’s skill. Watch and learn from seniors in the national teams. You all have it in you too. Sky is the limit and you should persevere to be an international player and make your parents and coach proud.”

Govt. of Odisha along with Tata’s have put together such great facilities and opportunities for youth like you to excel at the highest level. Dream big and I am sure you will achieve it too, he added.

Extending his best wishes to Hon’ble Chief Minister of Odisha, Shri Naveen Patnaik, and Department of Sports& YS, he said, “Even today, the global hockey fraternity talks about the spectacular Hockey World Cup hosted by Odisha in 2018. The State has set a benchmark. Even the hospitality extended to players was by far the best. I thank Govt of Odisha and Naval Tata Hockey Academy Odisha for giving me this opportunity to visit the centre. It is always a pleasure to be on the turf and interact with young hockey players. These young legs made me work hard this morning and I am so pleased to notice this talent here.”

His message to the cadets was simple and profound. He also engaged in simple conversations with the young players who were left elated with their experience with the legends.

Beaming with joy on her interaction with Dhanraj Pillay, cadet, Sumi Mundari, who hails from Rourkela, shared, “We had only seen him on TV. Today, we trained with him on the turf. It is like a dream come true. It is a moment of pride for all us here. His simple techniques we will follow. He is very inspiring and someday, we hope to make it big, like the players in the Indian Women’s Hockey Team.”

Len Aiyappa, India’s fastest and most successful drag-flicker demonstrated the art of drag flicking which the cadets quickly got a hang of.

Congratulating the State Government, Shri Len Aiyappa said, “I commend Odisha government for giving youngsters the opportunity and facilities here, besides hosting all international tournaments here. The state will also host the 2023 Hockey World Cup and I congratulate the government for supporting the sport of hockey and the young talented kids. With all the facilities and a beautiful turf, the cadets are fortunate to be training at the Naval Tata Hockey Academy Odisha. They will have a bright future from the centre.”

It was a momentous occasion this morning to receive Dhanraj Pillai, the four-time hockey Olympian along with our very own Padamshree & Hockey legend Dilip Tirkey in the company of well-known Indian drag-flicker Len Aiyappa, who was magical in his demo on the art of Drag flick to the young aspiring specialist. While Dilip gave specific tips on art of penalty corner to the girls, Dhanraj Pillai was inspiring in taking to the pitch by demonstrating the nuances of set pieces that is an integral part of modern-day hockey. It was truly rewarding morning and such interactions makes the cadets experience enriching to say the least, said Shri. Rajiv Seth Project Director, Naval Tata Hockey Academy, Odisha.

The legends also had a quick interaction with some aspiring boys who have come for final selection trials at the NTHA Odisha.