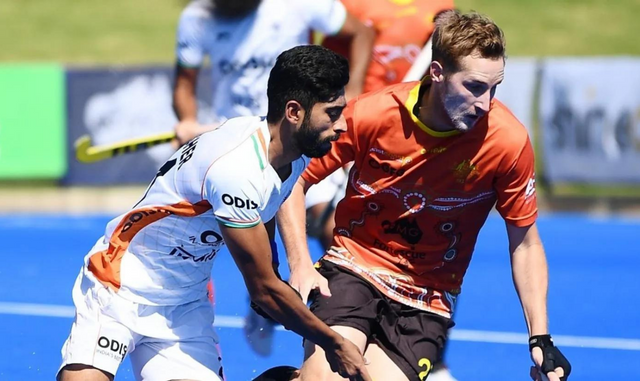 Adelaide: Australia came up with a clinical performance to outclass India 5-1 in the fourth match of the Australia Tour being held here in the Mate Stadium, in Adelaide. With this victory, Australia seals the five-match Series with 3-1 victory, and one more match to be played.

The World no.1 side showcased their defensive prowess today, led by star goalkeeper Andrew Charter who made some exceptional saves to keep India from scoring.

After the initial few minutes of struggle to make space in the striking circle, India made the breakthrough in the 25th minute when Dilpreet put his skillset on display to fetch India a 1-0 lead. The visitors could not hold on to the lead as Australia responded with a goal in the next four minutes. It was in-form Hayward who converted a penalty corner in the 29th minute. Only a minute later, they put another one in the net through Jake Whetton.

Even though Indian forwards made desperate forays into the striking circle in the following two quarters, they could not breach the home team’s defence. To add to their woes, Australia pumped goals at regular intervals giving India no room to bounce back.

Two goals in the third quarter via Tom Wickham in the 34th minute and Hayward in the 41st minute further put India under the pump. The final quarter too saw Australia ride on the momentum, they increased the lead to 5-1 from a penalty corner in the 54th minute, only to end the game in their favour.

“Australia were definitely a better team today. They played defensively right from the start and we could not capitalize on the lead by putting pressure on them. As I had said earlier, this tour has given us great exposure and playing against a quality side like Australia is always a learning experience. We now know the areas that we need to further work on ahead of the FIH Odisha Hockey Men’s World Cup 2023 Bhubaneswar-Rourkela,” expressed Captain Harmanpreet Singh.

“We will try and bounce back in tomorrow’s match and look to end the tour on a good note,” he signed off.