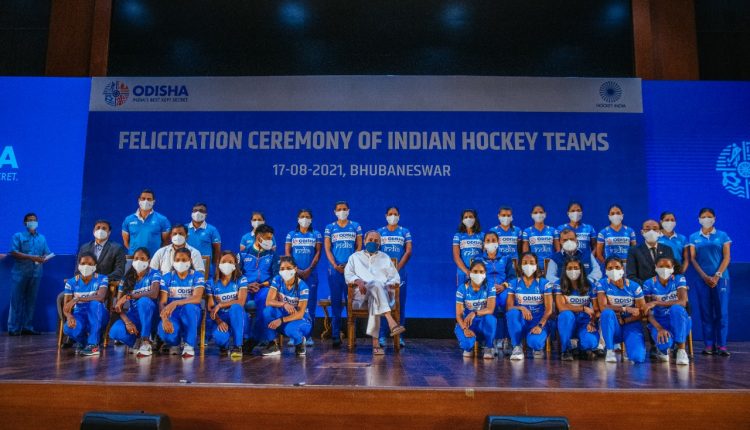 “The inspired performances at the biggest of all stages cannot be produced overnight and therefore Indian hockey will always be indebted to the incredible contributions made by its official partner – Odisha,” Hockey India said in a press note.

The Odisha State Government, which became the official partner of the Indian Men’s and Women’s Hockey Teams in 2018, has extended its partnership with the national teams for 10 more years. The announcement was made today during the State felicitation program organised for the Indian Men and Women’s Hockey Teams in Bhubaneswar after their historic performance at the Olympic Games Tokyo 2020.

A team of winners can only be made with a combination of all stakeholders towards the one objective. One initiative of the Odisha government was the refurbishment of the Kalinga Stadium for the Odisha Hockey Men’s World Cup Bhubaneswar 2018, giving an opportunity to the Indian Men’s Hockey Team to play in a state-of-the-art stadium in front of their home fans. Through the efforts of the Odisha government and Hockey India, many additions were made to the stadium to create an enthralling experience for fans and players. Both Practice and main turfs were re-laid with new blue turf as per the FIH specifications. The capacity of the main stadium was increased to 15,000. Two new galleries, one on North and other on the South side, was added to the iconic venue, making it a total of four grand Stands.

Following the success of the Men’s Hockey World Cup, Odisha hosted big competitions such as FIH Men’s Series Finals 2019, Olympic Hockey Qualifiers 2019 and the FIH Pro League in 2020. The Indian Men’s and Women’s Hockey Teams have improved manifold after practicing and playing with the aid of world-class facilities and infrastructure. Furthermore, the Odisha government has already commenced the construction of a new world-class stadium in Rourkela city which would be the biggest stadium for Hockey in India with a sitting capacity of 20 thousand. The stadium is set to be utilized for the FIH Odisha Men’s Hockey World Cup India 2023.

Expressing Hockey India’s gratitude towards Odisha’s undying support to Indian hockey, Hockey India President Gyanendro Ningombam, said “The state of Odisha has been the bedrock of the growth of the Indian Hockey Teams in the last few years. We cannot thank enough the Hon’ble Chief Minister of Odisha Shri Naveen Patnaik and his team for their heartfelt contributions to the evolvement of the sport of hockey in India. Without their infrastructure and astute guidance, it would’ve been very difficult for the Indian Hockey Teams to play the way they did in the Tokyo Games. We are Hockey India are absolutely elated about the Chief Minister’s decision to extend the term as Official Team Sponsor for ten more years. This will certainly boost the sport and elevate it to the next level.”

Thanking the Odisha government for their tremendous contribution to Indian hockey, Indian Men’s Hockey Team Captain Manpreet Singh said, “It was a special moment for us when we achieved our dream of winning an Olympic Medal and I would like to thank the Hon’ble Chief Minister of Odisha Shri Naveen Patnaik, who has supported us throughout our journey. His vision and encouragement have helped us tremendously to achieve this remarkable feat for the country. Thank you so much Sir for your incredible support. I would also like to thank the people of Odisha for coming to the ground and supporting us whenever we have played a match at the Kalinga Stadium. I would also like to thank Odisha for being our official partner for many years and also extending its partnership with the team for ten more years.”

“The players have to be the ones to triumph on the field, but a team can only win if it has the necessary infrastructure, facilities and full support of their partners at their disposal. The Odisha state government has ensured that we are given the best facilities so that we can play at our best in every competition and therefore I would like to give big thanks to the Hon’ble Chief Minister of Odisha Shri Naveen Patnaik and his team for sponsoring us for many years and helping us achieve our best result at the Olympics. We were extremely ecstatic to know that Odisha will be our official partner for 10 more years. The experience of playing the FIH Olympic Qualifiers at the Kalinga Stadium helped us tremendously while preparing for the Tokyo Games. Thank you so much to the people and Government of Odisha for your massive support in the last several years,” said Rani.