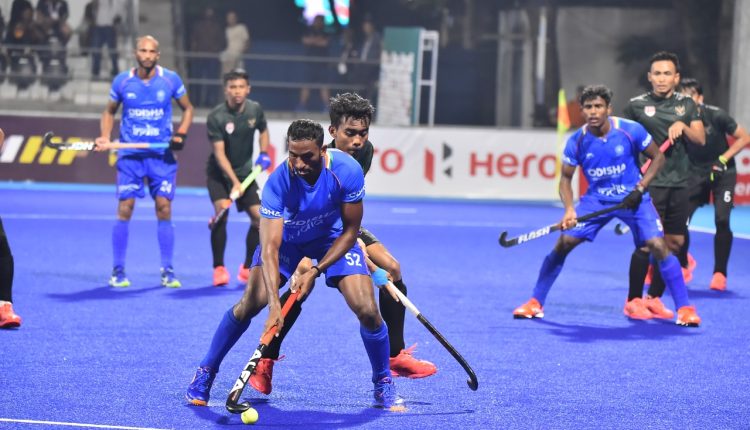 India started the match against Indonesia at a relentless pace against the hosts, showcasing their intention to get a big win from the start of the match. In the 7th minute, the team missed a clear chance to get the first goal for India. But they did not have to wait for long to get off the mark as Pawan Rajbhar struck two goals in two minutes to give his team a 2-0 lead before Uttam Singh added another goal just before the closing of the first quarter.

SV Sunil made an impact in the 2nd quarter as he deflected the ball into the Indonesia net in the 19th minute. A minute later, Nilam Sanjeep Xess added another goal for India from a PC as India extended their lead to 5-0. SV Sunil deflected the ball into the back of the nets a few minutes later to extend India’s lead to 6-0 before the half-time.
Indonesia goalkeeper Alam Fajar defended well in the third quarter as India continued to search for more goals. Karthi Selvam finally broke the resistance in the 40th minute, getting the 7th goal for India. Skipper Birendra Lakra made an impact, getting the 8th goal for India in the 41st minute, after which Dipsan Tirkey and Sudev Belimagga scored a goal each to take India to 10-0 before the start of the final quarter. In the final 15 minutes, Dipsan Tirkey scored thrice, Sudev Belimagga scored a brace, while Selvam Karthi added another goal as India picked up a consolidating 16-0 win.

India will play their first game of the Super 4s against Japan on Saturday.

PM Modi Launches Projects Worth Over Rs 31,500 Cr In Chennai