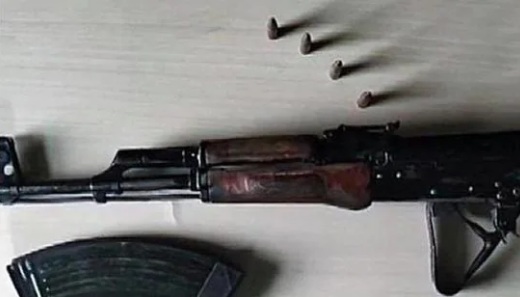 Srinagar: A Hizbul terrorist was killed in a joint operation inside the police camp at Tral on Thursday, following his refusal to surrender.

The slain militant has been identified as Mohammad Amin Malik.

According to reports, the terror operative was arrested on May 30, 2021, along with incriminating materials including arms, ammunitions and explosives including unlicensed 12 bore gun, live rounds, explosives, iron/steel balls, 9 feature phones and other warlike stores used in fabrication of IEDs.

A case was registered at Tral police station and the accused was taken for interrogation.

During the interrogation, the terror operative got hold of the service rifle (AK 47) of constable Amjad Khan and fired indiscriminately.

Malik critically wounded constable Amjad Khan, took control of the interrogation room and kept firing intermittently at the cops from the snatched weapon.

After a night of standoff, Malik was killed in a joint operation by Jammu and Kashmir Police, Central Reserve Police Force (CRPF) and the Rashtriya Rifles inside the police camp.

UP 12th Intermediate Board Exams 2021 Cancelled