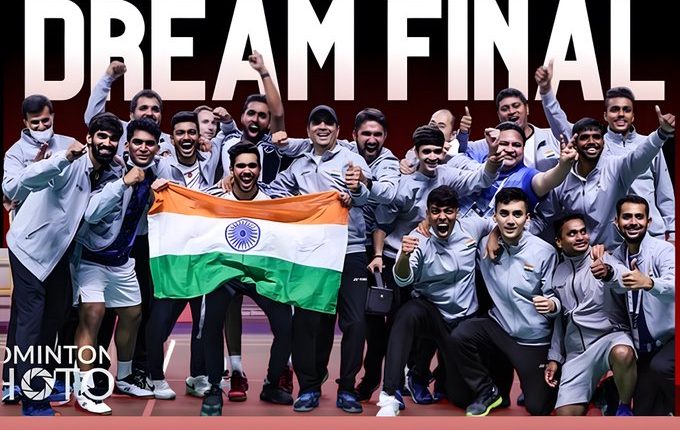 Thailand: The Indian Men’s Badminton Team created history by reaching the final of the Thomas Cup, courtesy of a 3-2 victory over Denmark in Thailand on Friday.

HS Prannoy won the pivotal fifth set against World No. 13 Rasmus Gemke to break the 2-2 tie and assist India in reaching their maiden final in the competition’s history. Prannoy led India to the final, where they will face 14-time champions Indonesia, after beating Gemke 13-21 21-9 21-12.

The Indian contingent swarmed the court to celebrate Prannoy’s historic victory over Gemke as soon as he secured the winning points.

Members of the Indian squad were seen running onto the court to hug Prannoy after he defeated Gemke in the final set, as shown in a video uploaded by the Sports Authority of India’s official Twitter handle. One of the Indian players was also seen holding the tricolour to commemorate the victory.

The match started with a clash between world championship bronze medallist Lakshya Sen and Viktor Axelsen. The latter defeated Sen 21-13 21-13 to provide Denmark with an early lead of 1-0. Satwiksairaj Rankireddy and Chirag Shetty then came out on top and beat the Danish pair of Astrup and Christiansen 21-18 21-23 22-20 to help India tie the contest 1-1. Kidambi Srikanth then defeated Andres Antonsen to hand India a 2-1 lead.

World Championships silver medalist Kidambi Srikanth, Satwiksairaj Rankireddy/Chirag Shetty and HS Prannoy were among the ones who came up with victories for India in the pulsating Thomas Cup semi-final tie against Denmark. Leader of the pack Srikanth has had a perfect record at Thomas Cup 2022, winning all 5 of his matches so far while Prannoy has delivered twice in must-win situations.

India retained the same line-up from Thursday’s quarter-final win and it worked for them as they won two singles ties to outclass Denmark, bronze medalists from the previous edition.