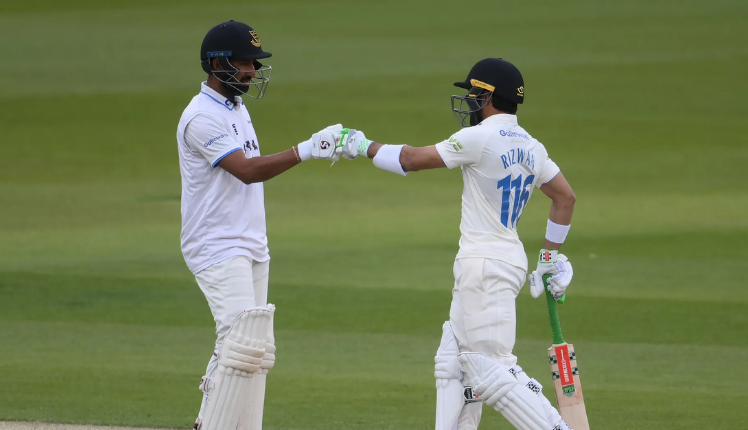 His Concentration And Focus Are Unreal: Rizwan Full Of Praise For Pujara

London: Mohammad Rizwan has praised Cheteshwar Pujara’s quality while elaborating on the things he has learned from the Indian batter during their stint together in County cricket.

The duo are currently playing together for Sussex in Division Two of the County Championship. Pujara has been in sensational scoring touch, aggregating 717 runs in four matches at an average of 143.40, with four centuries. The pair have also enjoyed a fruitful partnership of 154-runs together in a match against Durham in April.

Rizwan has been left impressed in particular by Pujara’s powers of concentration and his ability to construct a long innings. Speaking to cricwick.net, the Pakistan wicketkeeper-batter was effusive in Pujara’s praise, ranking him alongside his compatriots Younis Khan and Fawad Alam. Rizwan said, “In my life, the player with the highest levels of concentration and focus I have seen is Younis bhai. So No.1 is Younis bhai. After that, it was Fawad Alam but now Pujara is No.2 and Fawad Alam No.3.”

Rizwan also revealed the batting tips he picked up from Pujara, especially how to play close to his body. “With Pujara, I had a chat when I had just come to England and got out a couple of times. He told me a few things, that you should play close to your body. Now it is no secret that we play a lot of white-ball cricket and there we play well away from the body because the white-ball doesn’t swing or seam much and you are always looking for runs.”

He further elaborated, “So here, I got out chasing a couple of wide deliveries early on. Then I sought him out at the nets and he said, ‘in Pakistan or in Asia, we are accustomed to forcing our drives. You cannot force your drives over here. Secondly, you have to play closer to your body.'”

Rizwan also stated that it wasn’t strange for him to play with Pujara and that the pair had established a good rapport on and off the field. Rizwan also stated that all the international cricketers were a part of one large family, irrespective of their nationalities. “Believe me, I haven’t felt strange at all about it. I even joke around with him and also tease him a lot. He is a very nice person and his concentration and focus are unreal. If you can learn something from someone else, you must take that opportunity.

“The cricket fraternity is like a family for us. But if you are playing for Pakistan and your own brother is playing for Australia, then you will, of course, try to get him out because you are playing for your country. But that fight happens only on the ground. Otherwise, we are like a family. If I say ‘our Virat Kohli’, then I will not be wrong. Or ‘our Pujara’, ‘our Smith’ or ‘our Root’, because we all are one family,” Rizwan concluded.

Another Kashmiri Pandit Killed By Terrorists In J&K